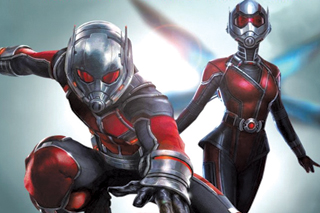 In the continuing saga of the Marvel comics universe and the aftermath of “Captain America: Civil War”, former criminal turned superhero, Scott Lang (Paul Rudd), protégé of Dr. Henry Pym (Michael Douglas) struggles to adapt to his home life as estranged, husband and father while being monitored by F.B.I. Agent Jimmy Woo (Randall Park) waiting for him to slip up with three days left of his house arrest remaining as Lang faces a 20-year prison sentence if he breaks his probation when he’s urgently needed on a special mission joining forces with Dr. Pym’s daughter, Hope Van Dyne (Evangeline Lily) as the Wasp.

This is everything a superhero movie should be. It has a great story, a stellar ensemble cast and outstanding CGI.

Paul Rudd is terrific as Scott Lang/Ant Man, but it’s Evangeline Lilly who steals the show as the Wasp. There’s lots of humor in this film and the banter between Lilly and Lang is spot on.

Director Peyton Reed keeps the rapid-fire action and snappy dialogue flowing as our heroes do battle the mysterious villain, Ghost (Hannah John-Kamen) while on their quest for Dr. Pym. Supporting actors, Michael Pena. Walter Goggins, Laurence Fishburne and Michelle Pfeiffer are outstanding in their roles.

As always, there’s cameo by creator, Stan Lee and staying for the end credits is a must.

“Ant Man and the Wasp” is the perfect summer movie for everyone.