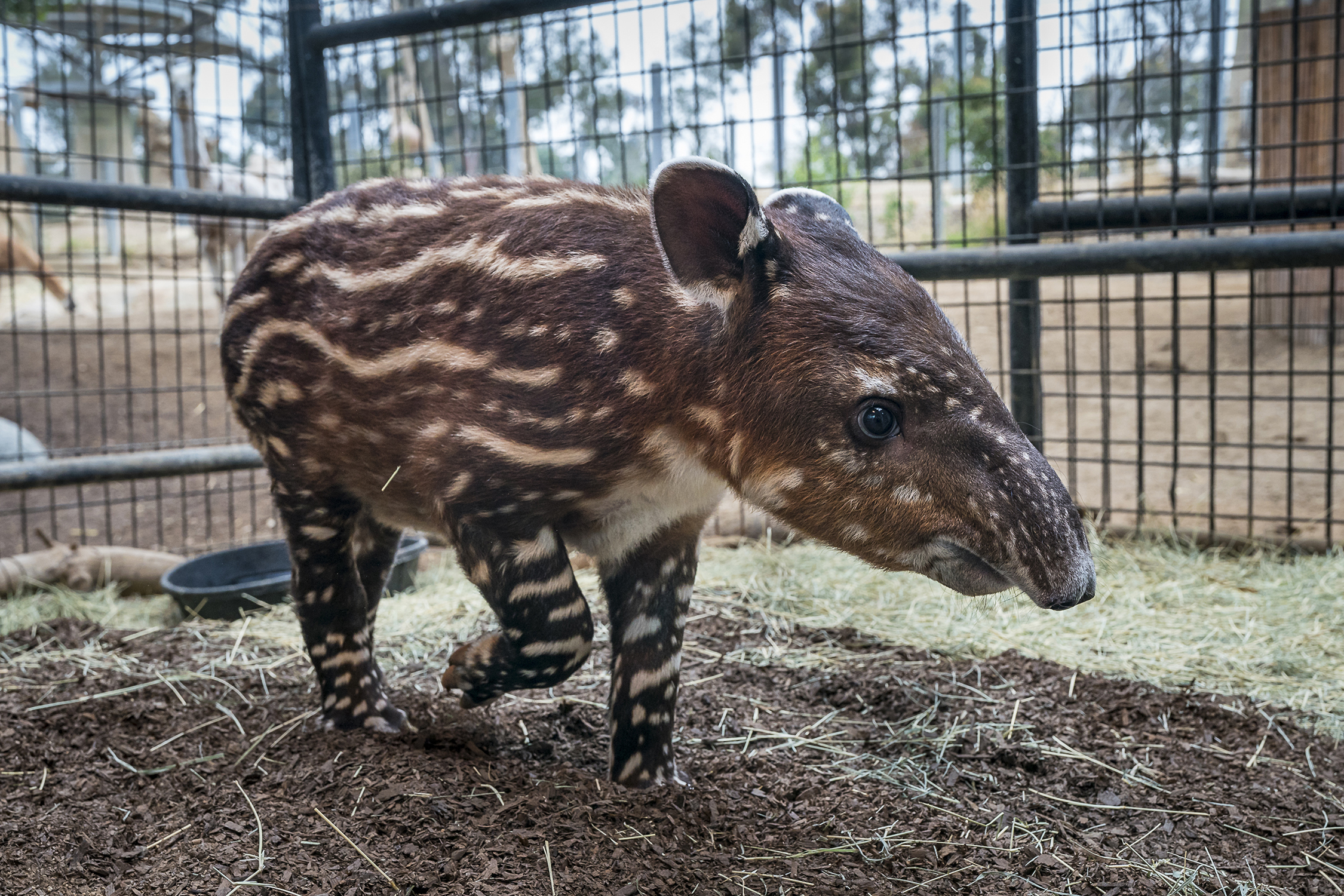 It’s “watermelon” season at the San Diego Zoo! A 13-day-old endangered Baird’s tapir calf strutted his unique striped coat—with a watermelon-like pattern—before his scheduled bottle feeding at the Zoo’s Harry and Grace Steele Elephant Odyssey. Animal care staff are helping with assisted rearing of the youngster, along with daily interactions between the male calf and his mother Luna—and the other animals that share his mixed-species habitat, behind a protective fence.

“Animal care and veterinary staff performed ultrasounds, using protective contact, for months leading up to the calf’s birth, to identify milestones in Luna’s pregnancy and provide useful information for future pregnancies of this endangered species,” said Matt Akel, animal care manager. “The last endangered Baird’s calf born at the Zoo was in 1988, so we’re thrilled with the arrival of this male—and happy to provide him with optimal care, since mom wasn’t successful.”

After a 13-month gestation period, the calf was born behind the scenes on June 13, 2018 to first-time mom Luna. When she wasn’t able to care for her newborn, animal care staff stepped in with assisted rearing, to ensure the calf’s health. At birth, the calf weighed 22 pounds, but he has steadily gained weight. Keepers milked Luna through protected contact during the first week after the birth, to provide the calf with necessary nutrition and round-the-clock care. However, the calf’s diet is now being supplemented with goat’s milk and a protein mix, and bottle feedings are provided five times a day.

The calf’s spots and stripes serve as camouflage protection in the dappled light of the tapirs’ forest floor habitat. Calves begin to lose these markings after a few months, and they resemble miniature adults at about 8 months of age.

Baird’s tapirs are native to Mexico and Central America. As a key species in shaping and maintaining the biological diversity of tropical forests, tapirs are vital components in their ecosystems. They are important seed dispersers and leave their forest habitat well fertilized, helping ensure new growth of plants that provide food and shelter.

The Baird’s tapir is listed as Endangered on the International Union for Conservation of Nature (IUCN) Red List of Threatened Species. Habitat loss and hunting have contributed to an estimated 50 percent population decline over the last 30 years. San Diego Zoo Global has long been committed to tapir conservation and has been a consistent supporter of tapir projects worldwide, along with contributing to the International Union for Conservation of Nature’s Tapir Specialist Group. Additionally, the San Diego Zoo participates in the Association of Zoos and Aquariums (AZA) Baird’s tapir Species Survival Plan (SSP), which aims to maintain a genetically viable population of this species in accredited institutions.

At the San Diego Zoo, the Baird’s tapirs live in a mixed-species habitat, sharing their space with capybaras and guanacos. Guests visiting the Zoo can view the new tapir calf in the upper yard when he ventures into his outdoor area.