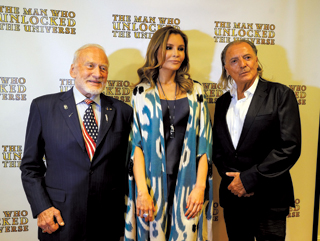 We were invited to attend the premiere of the documentary ”The Man Who Unlocked the Universe” at the luxurious London Hotel. This grade-A film tells the tale of Astronomer, Ulugh Beg (1394-1449) one of the world’s greatest astronomical minds, who turned medieval Samakand (now Uzbek), into one of the great centers of learning and science. We were particularly interested in this event, as our esteemed friend, Astronaut Buzz Aldrin was the featured guest.

Buzz, seen here with famed award winning actor Armand Assante (who portrayed Beg in the film) just returned from Washington, D.C. from his highly publicized meeting at the White House for the announcement of the new Space Force; and answered questions about the future of our Space programs. It is Buzz’s quest for the U.S. to reach and colonize Mars!

We were pleased to meet his charming international business partner, Lisa La Bonte who was the CEO of the Space Education Co. La Bonte and Edward Lozzi, Aldrin’s PR Pro are very excited about celebrating with NASA over Buzz’s 50th Anniversary of Walking on the Moon. So – it may have been Beg who has unlocked the Universe in the 14th Century – but our man, Dr. Buzz Aldrin may get us to Mars in the near future.

The Caucus for Producers, Writers and Directors held their 12th Annual American Spirit Awards honoring outstanding individuals who support, protect and promote the interests of storytellers. These honorees work and commitment exemplify American Spirit including war veterans, educators and humanitarians.

Current members of the Caucus include JJ Abrams, Tom Hanks, Dennis Doty and a score of other leading producers, writers and directors. For further info please contact Allison Jackson at 310.550.7719.

Since we just celebrated July 4 – I felt a patriotic column was in order.