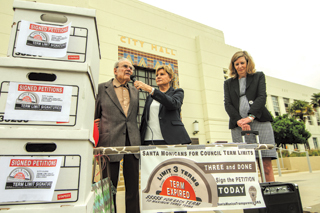 Santa Monica City Councilmembers debated the merits of term limits Tuesday night, July 24, before approving a measure that will put the matter before voters in the November election.

“I feel that the power of incumbency is so great and the fact that this is a volunteer position makes it something that other members of our citizen body should be able to serve in,” said Councilmember Sue Himmelrich. “I know so many young people in the City who would be responsible and responsive members of the City Council.”

Over the past 24 years, Santa Monica City Council has seen only two incumbents defeated in elections. The Santa Monica Transparency Project in response circulated a petition that calls for a three-term limit for Councilmembers. The petition received 19,166 signatures, 18,943 of which were verified by the City Clerk.

“Term limits give voters a real chance for change and bring in fresh perspectives and ideas. Term limits encourage potential candidates to run and foster healthy competition,” wrote Mary Marlow, Chair of the Santa Monica Transparency Project in the petition. “Incumbents are elected over and over again because of name recognition and the power of the incumbency.”

Despite unanimously approving the petition that will put the question of term limits on the ballot, Himmelrich, who cosigned the petition with Marlow and has vowed to step down after three terms, was the only Councilmember who expressed support for term limits. Councilmember Kevin McKeown, who has served 20 years on the Council, believes voters should have the final say in the matter because of due process, but argued that term limits infringe on voters’ rights.

“This is described on the staff report as limiting the time a person can serve on the City Council, but it can just as easily be described as a ballot measure that will limit the voters’ options,” McKeown said. “I have been elected to the City Council five times now, the last three times I was the top vote-getter, which indicates to me, that at least in the eyes of a significant amount of Santa Monicians, I can continue to do a good job after three terms.”

Mayor Pro Tempore Gleam Davis, who has served on City Council since 2009,  said at the meeting that term limits decrease the productivity of a governing body at both the local, state and federal level. Furthermore, Davis argued that term limits can be used to oust popularly elected politicians that are opposed by a minority of voters, pointing to the example of Congressman John Lewis, the civil rights leader who has served as U.S. Representative for Georgia’s 5th congressional district since 1987 but would not be in office if there were term limits in Congress.

“I don’t agree with the idea of term limits. I think they have actually been proven to be quite deleterious to getting business done in Sacramento and other jurisdictions that have them like the City of Los Angeles,” Davis said. “To say that it is not political may be sincere but isn’t true because this will inevitably be viewed through that lens. I think we have term limits and they are called elections.”

Councilmember Tony Vazquez, who served on City Council from 1990-1994  before running again in 2012, opposed the notion of lifetime term limits but was open to the idea of limiting the number of consecutive terms an individual would be able to serve.

“I think that to exclude somebody to three terms and then you cannot ever come back is unconstitutional in my point of view,” Vazquez said. “I hate to see somebody come in at a young age of let’s say 30 years old and serve three terms, and he is excluded, or she is excluded, for the rest of their life.”