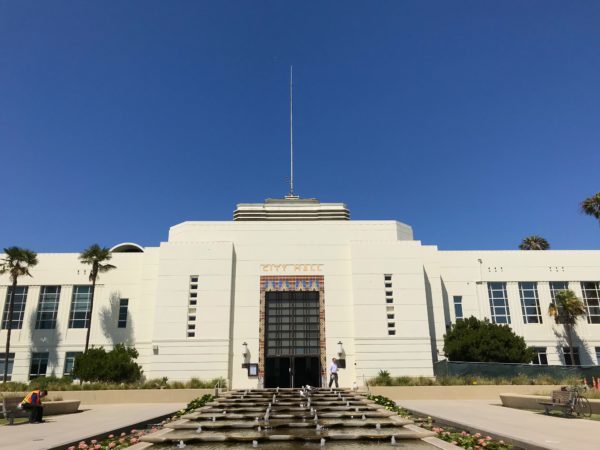 In the waning days of summer, SMa.r.t. (Santa Monica Architects for a Responsible Tomorrow) turns its thoughts to the fall which means the upcoming elections where residents will elect a City Council that might actually try to help solve the important issues confronting the residents of our City.

If we were to make a list of those issues, number one might be personal safety. With crime up about 18% since the last election, with seniors being mugged and assaulted in broad daylight downtown, and the Ocean Park library vandalized, the crime reduction prognosis is not good. Likewise residents, who are paying one of the highest sales tax rates in the State, see their spendthrift City Council wasting  their money buying $2 million toilets in Clover Park and spending at least $5 million (the equivalent of about 10 affordable units) in an unnecessary court case to forestall City Council elections by District; not to mention the runaway inflated payroll and pension time bomb they ignore.  Again the prognosis does not look good for what should be a fiscally prudent City. Finally mobility (or really the lack of it) is an ongoing crisis. Our City is still in complete gridlock, our public transit is losing ridership and now we have the Blithely-Inviting-Random-Disaster scooters menacing our pedestrians daily. In spite of great progress being made on new bike paths and other worthy transit initiatives, we are in no way prepared to deal with the mobility problems aggravated by the escalated development pressures caused by the light rail line and the ongoing downtown metastasis.

These are all problems that have been around for a long time and have worsened during the watch of the existing City Council.  Now three of the incumbents are running for reelection and given past history are highly likely to be re-elected. Given that past history, the probability that this likely re-elected City Council will solve or at least improve these issues is unfortunately rather small. The existing Council is not nimble enough, independent enough, nor visionary enough to move the needle on crime, fiscal responsibility or mobility, not to mention the really BIG problems our City faces such as sea level rise (eg climate change), water shortage, energy sustainability, housing affordability, self-driving cars, and a possible recession on the horizon. It’s not that the existing Council hasn’t tried to face these problems, but successful results have not been evident to the residents.

What about new blood on the City Council? The electable challenging candidates (for example Brock or Marlowe or Melkonians among others) who have enough name recognition, having served the City by countless hours of public volunteer service, thereby learning the ropes of how the City runs, have all withdrawn due to the high cost of running, by the inability to secure the vital Santa Monica for Renter’s Rights or the out of town Hotel Workers Union endorsements, and by the asymmetry of running against developer funded incumbents.  The advantages of incumbency have historically been so overwhelming, that regardless how you might feel about a particular challenger’s desirability, they face an impossible fight against the interlocking interests of the embedded political machine that runs the City.

With this dismal prognosis, there are still two reasons for hope on the distant horizon. One is the City Council 3 term limit initiative on November’s ballot. While the impact of this would not be felt for another 12 years, if passed in November, it would eventually slowly start to eliminate incumbents thereby creating more opportunities for new blood to emerge. It is a well-known axiom of politics that new candidates come into office with high ideals and wonderful responsiveness to their voters. But over time, while they are learning to be more effective in their role, simultaneously they lose their responsive edge, fatigue sets in and they become more accountable to their donors rather than to their original ideals and voters. Just look at our current Council and their actions as evidence. This process, sometimes called “drinking the kool-aid”, is universal with very few exceptions: remember our Council persons are both volunteers and human. Term limits will hopefully will short-circuit this “natural” process.

The second reason for hope is unfolding in a Los Angeles courtroom right now. This is a lawsuit brought by Maria Loya against the City for discrimination against minority residents of the Pico Neighborhood by the City’s use of at-large Council elections. At-large elections make it harder for minority interests to make themselves felt because their voting interests are diluted by the voting power of the entire City which again favors the citywide incumbents. District elections make campaigning for challengers much easier: its easier to convince the majority of approximately 13,000 residents (if there are seven districts) to vote for you than the majority of 94,000 residents.  Apart from justice for minority voters, if the District elections suit wins, it would make it cheaper for challengers in all districts to get elected, and equally important would make every council person more responsive to their individual voters. It does, however, require local candidates to be groomed in each district to be ready to be effective Councilpersons.

Your City Council spent at least $5 million of your money to fight, in court, District elections and to protect their safe Citywide seats rather than have to meet the fine grain needs of their local voters. In other words, public dollars are being used to protect incumbents: another example of the dominant advantage of incumbency.

Term limits and district-wide elections are good future improvements but unfortunately are probably too late (given election risks and court delays) for this election.  So are we doomed to another 2 years of a City Council that barely keeps the City afloat as it takes on more water? A political odds maker would probably say yes, but SMa.r.t. would love to be proven wrong. Vote for a change this November.