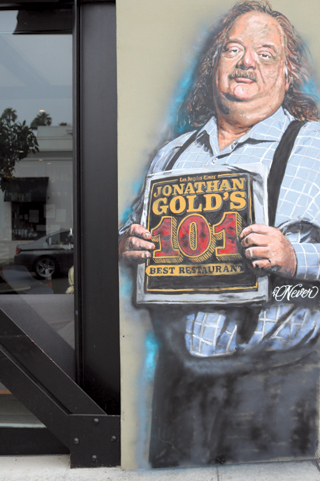 The artist behind the mural is Jonas Never. Never was born and raised in Santa Monica and was a baseball star at Santa Monica High School before he became a prominent muralist.

The mural of the beloved food critic is located on 16th and Montana and depicts Gold holding a copy of the Los Angeles Times’s Jonathan Gold’s 101 Best Restaurants. The annual publication featured Gold’s favorite restaurants in the greater Los Angeles area and over the years included many in Santa Monica.

At Cassia, the Vietnamese and French-inspired restaurant on 7th Street in downtown Santa Monica, Gold wrote in high praise for chef Bryant Ng’s creative dishes such as egg custard with sea urchin and escargot Vietnamese style: Snails and lemongrass.

“At Cassia, nominally Vietnamese, he is claiming the essence of French cooking as his own,” Gold wrote in his 101 Best Restaurants review for the Los Angeles Times

At Rustic Canyon – owned by Josh and Zoe Loeb, the owners of Cassia – Gold took to heart chef Jeremy Fox’s use of seasonal vegetables, often from the Santa Monica Farmer’s market. In addition, Gold made a bold claim about Rustic Canyon by writing in his review the “electric-green shellfish pozole is remarkable, conceivably the single best dish to be found in Santa Monica.”

Gold was known for bringing to light obscure restaurants throughout the city but also loved the classics such as Michael’s, the longtime Santa Monica fixture on Third Street. In his review, Gold gave Michael’s credit for kickstarting the California cuisine movement and took to heart how the restaurant has evolved over the years.

“Michael’s can credibly claim to be the birthplace of California cuisine, but current chef Miles Thompson takes things in a different direction, punctuated with dusky greens and splashes of citrus, whole grains and fermented things,” Gold wrote in his review for the Los Angeles Times.

Many gave Gold credit for popularizing street tacos in Los Angeles but the critic was also fond of Mélisse, the two-star Michelin hyperformal restaurant on 11th and Wilshire that is the antithesis of street food. In his review, Gold acknowledges that Mélisse fulfills stereotypes and cliches about fancy restaurants and this is exactly what makes the restaurant work.

“You can’t hold ironed tablecloths, romantic mood lighting and lobster Bolognese against a place whose appeal rests on exactly those things,” Gold wrote in his review. “When you’re in the mood to be clobbered with truffles and drink good white Burgundy, Mélisse is an obvious place to go.”

Gold wrote a glowing review for the pressed duck at Dialogue, Dave Beran’s tasting menu restaurant in Santa Monica, going as far to say that it was one of the best things he has eaten in his entire life.

“Beran presses his ducks behind the counter, capturing the juices that flow from the silvery spout and reducing them with aromatics until they thicken into a suave gravy,” Gold wrote in his Los Angeles Times review.

While many of Gold’s favorite restaurant in Santa Monica were modern and somewhat formal, he also was a fan of the sandwich every person in Santa Monica is a fan of: Bay Cities’ Godmother. In the 2010 LA Weekly article “99 Things to Eat in L.A. Before You Die” Gold pointed out just how popular this sandwich is on the Westside.

“It occasionally feels as if the Westside would stop functioning without the doorstop known as the Godmother, which includes a slice of every Italian cold cut you’ve ever heard of, and a couple that might be new to you,” Gold wrote in the review.