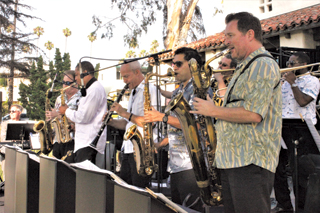 Saturday July 28, the City of Santa Monica’s Community & Cultural Services department continued their annual Summer Concert Series, “Meet Me at Reed.” Throughout the month of July, the Parks and Recreation staff have been present at the concerts in support of Park’s Month. For the final Meet Me at Reed performance of July, the Paul McDonald Big Band took to the stage with an 18-piece band comprised of brass, percussion and guest vocalists.

Returning for the pre-concert festivities were the recreation staff who brought an assortment of blue building blocks. Children and their parents built various structures with one another until the band started their sound check. Heath Hamilton informed attendees that the following week the staff would be at Gandara Park for Jazz on the lawn, which will take place on Sundays throughout the month of August.

With more than a 150 attendees on the lawn of Reed Park, the Paul McDonald Big Ban launched into their first set of songs, an eclectic mix of jazz, salsa, blues and original compositions. The accomplished conductor-composer has worked with the BBC Radio Big Band and Orchestra, and was invited to play the Meet Me at Reed Series after members of

the Santa Monica City Government had seen his performances locally. “We used to play a lot at Typhoon, which is a restaurant at the Santa Monica Airport. We played there for a long time and some people from the City saw us, and asked if we would do a concert at Meet Me at Reed,” stated McDonald. While McDonald has played in and around Santa Monica before, he cited that this was the first time he was playing the Meet Me at Reed concert series.

The composer and jazz pianist stated that the music played during the set consisted of original compositions and covers, but the arrangements are his. For aspiring musicians, McDonald advises to “get involved with as many different music projects as you can, play a theatre, play jazz, rock, play with your friends, play along to records, eventually you find your voice. Try to get involved with as many types of music as you can.” Over the course of the concert, McDonald’s advice was reflected in the song selections which ranged from Latin to New Orleans Jazz and more.

As part of the performance, Paul McDonald invited guest vocalist Tom Noland to join him on stage for a series of songs. Wearing a pair of sunglasses and tan fedora, Noland addressed the crowd, with a baritone voice stating, “We’re so happy that you could come out and support living musicians. You’ve heard about them haven’t you? They’re alive. DJs are pretending that we have all disappeared, but the truth of it is that we’re still alive.” During his time on stage he invited the crowd to get on their feet during a rendition of a Dixieland classic, “Bourbon Street Parade.” He waved his handkerchief in the air while singing, before stepping off the stage to hand out beaded necklaces to people dancing in the crowd. “I listen to everything, but the music that is blues-based is what moves me most; everything from rock and roll up,” he told The Mirror.