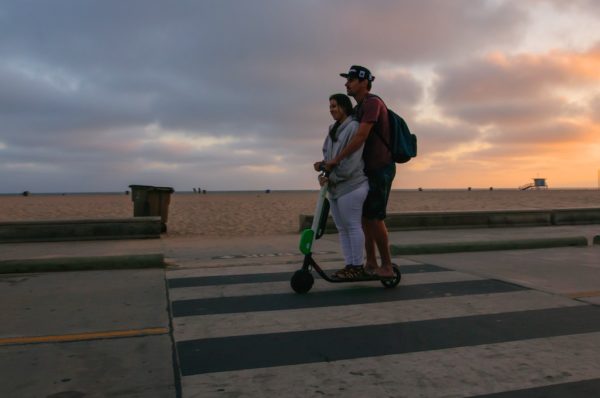 The hotly debated e-scooters have been taking up quite a bit of public space in Santa Monica, and they’re about to get charged rent and have been officially banned from the beach bike path.

On August 28 at the weekly City Council meeting a resolution was passed to charge e-scooter operators a fee for using the public right of way.

The staff recommended that this fee be added to the current charges levied on scooters companies under the Shared Mobility Pilot Program, those costs being $20,000 per operator as well as $130 per device annually.

“Currently adopted fees recover only program oversight cost, and do not compensate for the use of public property for private commercial purposes,” the staff report reads.

Introducing the item at the council meeting was Mobility Manager Francie Stefan. While the focus of the item may be e-scooters, Stefan specified that this is a part of a larger increase of new mobility devices – as well as Transport Network Companies (TNCs) like Uber and Lyft – on the streets.

“Electric scooters have amplified this in real terms right now,” she said. “It’s increasing competition for our precious sidewalk space.”

Stefan went over several other examples of land use charges currently in use such as parking meters, taxi zones and valet services. She also alluded to potentially expanding such charges to TNCs, automated deliveries and other commercial enterprises that increase congestion in the future.

Some proposed uses for the fee include increasing protected travel lanes and the creation of parking areas for the scooters.

The fee suggested by staff is calculated based on the amount of space each device takes up on a daily basis. This square footage varies, however, depending on whether the devices are left standing upright or laying on their side, where they can fill 12 to 18 square feet, according to the staff report. Based on the established value of $2.48 per square foot each month, the recommended fee for the scooters was set at 98 cents per scooter per day.

Mayor Pro Tempore Gleam Davis moved the staff recommendation to apply the fee, but stated that the decision was only a response to the very sudden impact of the scooters, and hopes that a better solution will be found after further observation of the Pilot Program.

Davis also suggested that the proposed $89,000 earned monthly from these shared mobility devices be used specifically for the development of infrastructure for them.

“I think as we go through the 16-month pilot we’re gonna learn a lot about how we should be regulating these various means of mobility,” she said.

Councilmember Kevin McKeown voiced his support of the motion, stating that while he feels that community members would rather the scooters be done away with, he believes that making the devices safer will ease public outcry.

McKeown specified that the ways the council could make such devices safer would be through educating the public on proper usage, engineering our streets and sidewalks to accommodate the changes and enforcing any changes.

“All three of those cost bucks,” he said, “and by charging a fee… we generate some funding that makes it possible for us to make the scooters safer in our community.”

The only “no” vote came from Councilmember Terry O’Day, who felt that the fee was misdirected and may discourage people from using sustainable alternatives to cars. He argued that if the real reason for these fees is to increase safety, there are higher risk vehicles than scooters.

“It’s the 2,000-pound vehicle not the 15-pound vehicle,” he said. O’Day also took issue with the proposed use of the funds in creating parking areas on sidewalks, citing that scooters crowding the sidewalks were the number one complaint from local residents.

“That just doesn’t make sense to me,” he said, “we should be taking parking spaces for these.”

O’Day went on to argue that these changes would potentially be encroaching on pedestrian space when if anything they should encroach on cars.

“When we take a step like this we’re expressing our values,” he said. “We are further encoding the subsidies that exist for cars.”

Mayor Ted Winterer made a “friendly amendment” that the fee be rounded up from 98 cents to one dollar per device per day, and added direction for the resolution. He suggested that the use of the fee would be explicitly for improving shared mobility device infrastructure and that any parking corrals for such devices would have as small an impact on pedestrian space as possible.

Also at the meeting Tuesday night, City Council amend the Santa Monica Municipal Code to clarify that motorized scooters are prohibited on the beach bike path and City parks. Existing rules already bar these devices but the Council’s action makes clear that all non-human powered devices are prohibited in these areas.

“Updating the Municipal Code to clearly prohibit electric and motorized devices, as defined by the California Vehicle Code, clarifies the law and eliminates potential confusion regarding enforcement and regulation of such devices throughout Santa Monica, particularly on the beach bike path, on the Pier and in City parks,” wrote City Public Information Officer Constance Farrell in a press release.

According to the City, The Santa Monica Police Department and the Code Enforcement Division will begin actively enforcing the illegal use of scooters and shared mobility devices on the beach bike path, the Pier and in parks.