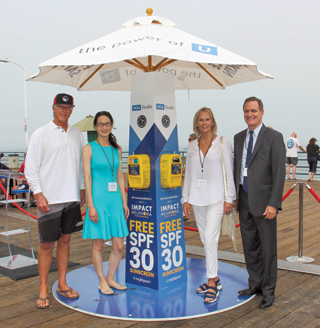 50 dispensers slated for city beaches, including in Santa Monica.

Nothing ruins a nice day at the beach more than forgetting to apply sunscreen and turning into a lobster. Now in Santa Monica, this may become a less frequent misfortune, as beach patrons will soon have access to free sunscreen thanks to 35 dispensers to coming to beaches throughout the city.

This is part of a public health campaign between UCLA, sunscreen company BrightGuard and the nonprofit organization IMPACT Melanoma with the goal of raising awareness about the importance of wearing sunscreen. According to some estimates, between 40-50 percent of Americans who live to age 65 will have skin cancer at least once in their lives. Dr. Jennifer Hsiao is a dermatologist at UCLA’s Medical Center and spoke at the launch of the campaign about the importance of wearing sunscreen, even when it is not sunny.

“Sunscreen is such an important first line of defense our skin has against developing skin cancer,” Dr. Hsiao said.  “Even on cloudy days, 80 percent of harmful rays from the sun can still penetrate your skin. Every day, no matter if it is overcast or just overtly sunny, it is good just to wear sunscreen.”

The first dispenser, recently installed at Santa Monica Pier, is one of 50 to be installed throughout coastal access points and recreation parks in Santa Monica and Malibu. At the launch event, beach volleyball legend and UCLA alumni Sinjin Smith spoke about the importance of sunscreen, something many people learn before it is too late.

“I’ve spent a lot of time in the sun and fortunately I knew how to take care of myself and I feel lucky that I only have one little spot I had to have surgery on,” Smith said. “So just take care of yourself, you don’t know. Some people are more suspectable than others but put sunscreen on. It will pay for itself time and time again once you get older.

In addition to wearing sunscreen, wearing sunglasses that block ultraviolet rays and a hat when in direct sunlight is recommended for further protection. The sun’s ultraviolet rays are most intense between 10 a.m. and 2 p.m. and skincare experts advise extra precautions be taken when outside during these hours.

The free sunblock dispensers will be on beaches until October so be sure to take advantage of this while you can.