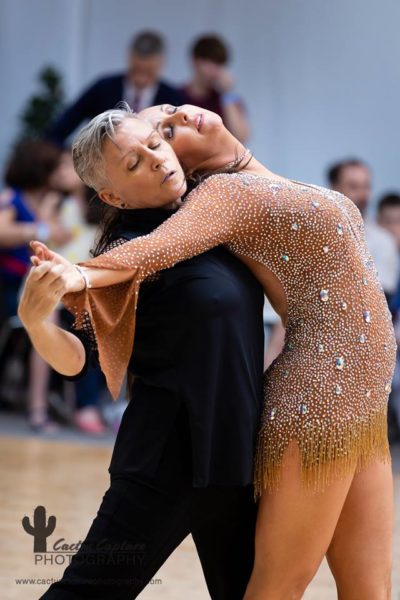 A Santa Monican’s journey to medaling in dance at the 10th anniversary of the Gay Games.

Ten years ago, now Santa Monica resident, Jo Popadynetz was asked what her goal was when signing up for a local gym.

The person signing her up laughed when she told them she wanted to compete in the Gay Games.

While it was a dream of hers, it was not yet set in motion.
This August, her and her dance partner, Deborah Fields Perez took home the bronze medal at the 10th annual Gay Games held in Paris, for the Women’s Senior Latin for the World Championship. The pair placed third out of 361 participants in the contest.

The Gay Games is held every four years and offers over 36 different sporting events. Participants can compete solo or as part of a team.
This year brought out over 10,000 competitors from over 70 countries.
Popadynetz’ journey to dance began in 2016 when a friend told her of a gay social dance class being held by Liora Paniz. Here, she fell in love with dancing because she got to lead for the first time.

The instructors she’s had made her feel very welcome by honoring her wish to lead in dance. Some instructors have begun saying “leader and follower” rather than “man and woman” in terms of who leads the dance.
“It was like a whole world opened up,” she said. “Dancing makes the whole world disappear, you can’t think of anything else but the steps, your arms, your partner and the music.”

She soon found out that Paniz was giving private lessons and taking her students to a same-sex ballroom dance competition in the Latin category in Ohio.

“Jo was immediately ready to go after the first class she took,” Paniz said. “Her eyes became bigger and brighter as the class progressed.”
Immediately after her competition in Ohio, Popadynetz threw herself into training for the Gay Games.

Initially, Paniz was going to be her partner, however, due to prior obligations and preparing to start law school at USC, she was unable to dedicate the time needed to prepare to compete.

Two months into training, Jo tore two of her hamstrings and required a major surgery. She couldn’t dance for seven months.

She resumed her training in August 2017, one year prior to the start of the games, and was still without a partner. She began asking around the studio where she was taking classes, By Your Side Studio, in Culver City, and Deborah Fields Perez, who owns the studio was eager to step up to the task. Although she was taking classes with another instructor and the two hadn’t spoken prior, Fields Pere said she saw that Jo had natural talent and given her dedication, she knew she would put in the work and give it her all.

“I took on the challenge, because I could see in her eyes how much it meant to her,” Fields Perez said. “I couldn’t say no if I wanted to.”
Fields Perez immediately got to work choreographing five dances for the competition. The next challenge was for the pair to learn the moves and focus on how to properly execute the dances.

Jo said she danced as often as she could afford, given that dance classes were private lessons. She often practiced at home, working on memorizing the choreography.

Arriving in Paris for the first time was emotional for Popadynetz.

“To see all the same sex couples on the dance floor rehearsing together and the music playing in this space where it’s safe and celebrated, it was overwhelming emotionally,” Popadynetz said. “Never before have I felt that kind of welcome and community.”

Popadynetz said the experience overall hadn’t fully set in until her and Fields Perez returned to the states and she had a moment to process it all.

For now, she’s not sure exactly what the future holds, but she said “I know this: I’m not going to stop dancing. I’m just going to put one foot in front of the other right now.”