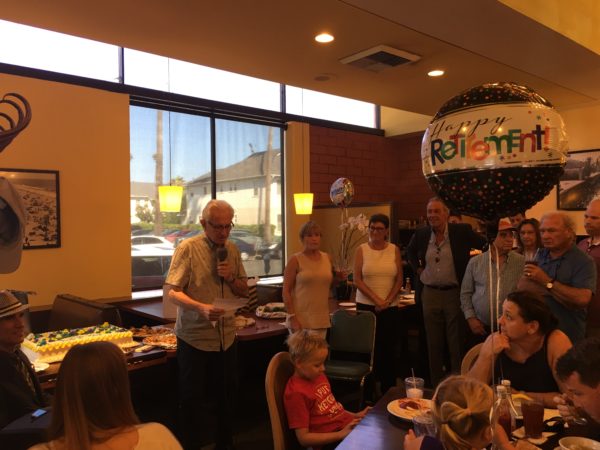 Around 50 of Solomon’s relatives, friends, co-workers and customers gathered at Fromin’s to celebrate his career, with live music, cake and speeches honoring the memories made over the deli case.

“I have seen so many people who have been coming to the deli their whole lives,” Solomon, 79, said. “We have shared meals, laughs and even some tears. I have seen generations that have come and gone, and remarkably I’m still standing.”

Solomon’s career stretches further back than most people’s lifetimes. When Solomon was a young boy, his family escaped Nazi-occupied Belgium and landed in Cleveland, Ohio. At 14, he began his career in restaurants, working as a busboy at his uncle’s deli. He moved to Los Angeles in the early 1970s, and for nearly 15 years, Solomon owned Marjan’s Restaurant and Deli in the Brentwood Country Mart. In 1990, he and his friend Dennis Fromin launched Fromin’s.

Solomon’s wife, Becky, said her husband found his calling in the deli.

“He is a true classic deli man,” she said. “He loves his customers. He loves his food, his presentation. He’s got corn beef in his blood. What he brings to it is an innate sense of food and family and tradition.”

Andrew Paris, who has been a Solomon customer since the age of 8, said the retiree’s friendly nature brought them closer together.

“We would go out to movies and play ball together,” he said. “It kind of morphed from a guy at the deli to one of my closest friends.”

In 1990, Solomon hired Paris to run Fromin’s delivery service. During the 10 years he worked there, Paris said Solomon became like a father to him, imparting values for Paris to live by.

“I did learn a lot from Maurice as a man growing up,” he said. “Just ethical. Do the right thing. There’s never gray area. It’s just right and wrong. Going home at night to be with your family, generosity, kindness.”

Becky Solomon said Maurice’s influence — on both Fromin’s and the Santa Monica community — can be summed up in one word: tradition.

“Just like ‘Fiddler on the Roof,’ it’s the tradition,” she said. “It’s the celebration of every lifetime event around food. It’s the bagels and coffee in the morning. It’s the chicken in the pot for dinner. It’s the pastrami Reuben for lunch… That tradition of food and emotion is just in every bite.”

One Fromin’s tradition is the Solomon Sunday brunch. Every Sunday for the last 15 years, all four generations of his extended family gather for brunch at Fromin’s while Solomon worked.

Solomon’s granddaughter Sydney Shaevel, who has worked at Fromin’s for the last seven years, said this tradition demonstrates her grandfather’s generosity.

“He was still working, but he got to see the whole family, and it was a really special family tradition,” she said. “That’s just how he is. He would give the shirt off his back. No matter what, he would do anything for his family.”

Shaevel said Solomon’s presence is what made Fromin’s a Santa Monica landmark.

“My grandpa being there has made it what it is,” she said. “That was part of the experience of going into Fromin’s: seeing him behind the counter and knowing he was going to be there pretty much every day was just a constant.”

No matter where retirement takes Solomon, Paris suspects you will likely still find him at Fromin’s — just on the other side of the deli case.