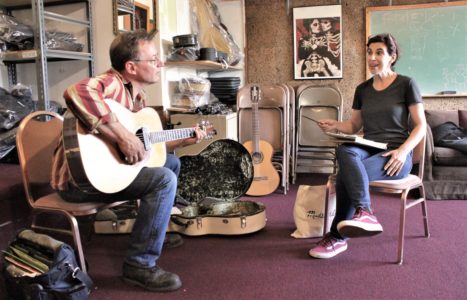 McCabe’s Guitar Shop on Pico is known for more than five decades of history. It is a location where musicians can pick out a new instrument or locals can check out a concert. Sunday, August 12, a handful of students headed into McCabe’s Studio 1 for a songwriting lab with renown musician Roy Zimmerman.

As heard on NPR, PRI, Air America and Sirius Radio, Zimmerman is a musician that injects a sense of humor into his songs that include themes of social justice, war, peace and politics. His music video “The Shady Bunch,” tells the story of “the con men who were running [a shameless grifter’s] campaign,” the parody is styled after theme song to the sitcom “The Brady Bunch” (1969-1974). He currently has 46.9 thousand views on the video via YouTube—which pokes fun at the politicians and executives, from Carter Page, Roger Stone and Michael Flynn to President Donald Trump and an “a guy named Putin.”

In his one-day workshop Zimmerman worked with songs that students brought in. Addressing elements of songwriting he provided insight on style, melody and word choice. He told The Mirror, “I taught guitar and songwriting at McCabe’s for fifteen years, starting in the very late 80’s. I was introduced to the wonderful world of McCabe’s by my wife, Melanie Harby, who worked there for fifteen years. She is my songwriting collaborator and a brilliant musician.” Inside the studio, the veteran musician listened attentively as each student presented their work in progress. “Student[s] bring their songs. The songs are the insights into a student’s needs. Maybe one needs melodic help, maybe lyrical help, etc,” Zimmerman stated. Over the course of his musical career Zimmerman has written hundreds of children’s songs for the Walt Disney Company as well as for Warner Brothers.

In addition to regular concerts, McCabe’s also has several studios available for group and private lessons. Inside Studio 1, students gathered for Zimmerman’s songwriting workshop. Laura Delledonne, was among the attendees who had brought in a few songs for the workshop. She knew the sound of her song on the piano, but did not know how to translate it to guitar. “I don’t even know what chords I’m playing,” she confessed. “I sing everything, [someone] will say something, and I will just start singing about it,” Delledonne said. She and Zimmerman then played a piano in the room to transcribe the chords and rhythms that she had been playing. She worked on her song “Lies,” receiving feedback on the verses and choruses from Zimmerman and a fellow student.

From “Weird Al” Yankovic, to Joni Mitchell, to Jeff Penalty (of the Dead Kennedys), Zimmerman is highly regarded for his lyricism. Among comedians, he’s shared the stage with Bill Maher, Ellen DeGeneres, Robin Williams, George Carlin, John Oliver and more. Regarding his own writing process, he stated, “The inspiration comes from the need to express a given emotion, idea, joke, etc. in the form of a song. Each song has its own requirements of you, and leads you through the process of writing it.”