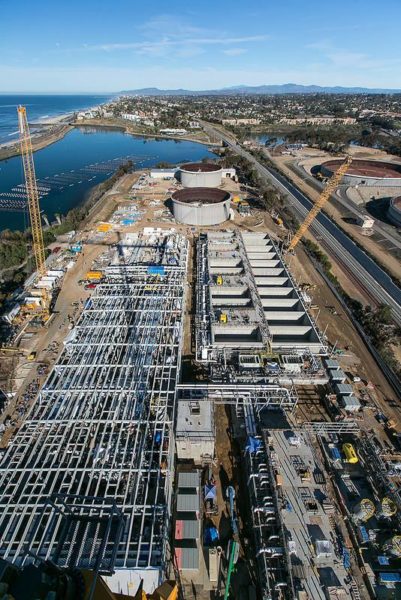 “Water, water everywhere, / Nor any drop to drink,” wrote Samuel Taylor Coleridge in the 1834 poem “The Rime of the Ancient Mariner.”

Coleridge was not writing about Santa Monica in this poem but he may as well have been. Santa Monica, like all of coastal Southern California, sits next to the Pacific Ocean, the world’s largest body of water but because of the salt, the water is undrinkable. This could soon change, however, as local water experts consider the possibility of removing the salt from the ocean to make it drinkable in a process known as desalination.

It is a myth the greater Los Angeles area is a desert but its semi-arid climate still does not produce enough water to sustain the nearly 20 million residents. In fact, 90 percent of the drinking water for the areas comes from either the Colorado River or Nothern California.

“That water travels around 400 miles to get here. It has to be lifted over a mountain range to get to Los Angeles and the lift requires one million horsepower of pumping,” said Eric M.V. Hoek, Ph.D., UCLA Department of Civil and Environmental Engineering. “The amount of electricity consumed in getting that water to Los Angeles could power 600,000 cars for a year.”

Hoek was speaking at a PRO/CON debate on the Santa Monica Pier on Tuesday, August 20 about the pros and cons of ocean water desalination. This is the process of filtering and processing salt water from the ocean to remove marine life and salt to make the water drinkable.

PRO/CON at the Pier is a non-partisan debate series designed to inform public discourse on ballot measures and current issues better. ProCon.org supplies experts from both sides of the topic as well as a neutral mediator to facilitate dialogue and reinvigorate the art of critical thinking.

Hoek was representing the “pro” side of the debate and argued that desalination will play a vital role in the future of Los Angeles and Santa Monica’s  water supply.

“We now can do water desalination for less energy and lower costs that it takes to import water from Northern California,” Hoek said.

San Diego County, however, only generates nine percent of their drinking water from the desalination plant. According to Tracy Quinn, MEng of the Natural Resources Defense Council (NRDC), the plants in San Diego and Santa Barbara stand as examples of the costs of water desalination, both to wallets and the environment.

Rather than invest in ocean desalination, Quinn argues that communities must invest more into conserving water instead of seeking out new water sources. Desalination Quinn says, with all the impacts it has on wallets and ecosystems, should only be used as a last resort.

“We [should] protect the affordability of water by prioritizing investments with cost-effective solutions first. For this reason, we should only invest in ocean desalination as a last resort once all other supplies have been exhausted,” Quinn said.

According to Quinn, the added benefit of investing in conservation alternatives is that they usually come in the for of things like rebates from new washers, new dishwashers, new showerheads and new toilets that are more energy efficient and save more water.

“[these are] things that help you save money on your utility bills and help your water supplier and your community save water offsetting stuff that you would be importing from other places or investing in desalination,” Quinn said.

Hoek at the debate also advocated for more conservation and acknowledged the costs associated with water desalination but said areas like Santa Monica that are within 80 miles of the coast do not bear the same degree of financial and environmental impacts.

“Conservation and recycling water recycling are critical, but as we use less water, we have less water to recycle,” Hoek said “But desalination will play a pivotal role in the future of Los Angeles and Southern California’s water resource management portfolio.”

For more information about the PRO/CON debate series, visit the series’ website at https://santamonicapier.org/procon/. The debate on Monday, August 27 is titled  “IMMIGRATION, Abolish ICE?” and begins at 6:30 p.m.