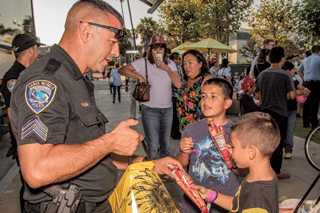 In an era when several high profile shootings have put public-police relations under increased scrutiny, one annual event in Santa Monica brought residents and officers together over hamburgers, yarn and a dunk tank.

Lt. Saul Rodriguez, executive officer to the chief of police and the department’s public information officer, said the event helps residents get to know the officers.

“We’re just like everybody else,” he said. “We’re human beings. We have families. Anything we can do to bolster that relationship between the community and police is extremely important for us.”

The event included stone decorating, food trucks, live music, a photo booth, information desks from city organizations, photo-ops on police horses and motorcycles, and even a tank where residents could dunk police officers into cold water.

“Everyone’s really positive,” he said. “They really want to talk to you, interact with you. They get a chance to see all the different things we offer as a department.”

Rodriguez said his favorite memory from the event was watching a 5-year-old dunk the captain of the Santa Monica Police Department in the water tank on his second throw.

“Having something simple like that is just great to have,” he said. “Kids get to come and do that and just enjoy themselves. Meanwhile, we enjoy ourselves watching our captain get dunked, so it’s a fun event for everyone.”

Santa Monica native and resident Mary Cornejo, who attends the National Night Out annually, said it teaches children not to fear law enforcement.

“The kids aren’t fearful of the Santa Monica police and know that they’re out there doing their job and keeping the community safe, which is a great asset to the community,” she said.

For the first time at the Santa Monica National Night Out, attendees were invited to participate in “I Am,” a community art project aiming to show what unites Santa Monica. The project consisted of 31 poles in a circle — each with a sign describing an identity, trait or experience. Participants wove yarn around the poles that described them, and all the threads were tied together in a pole in the center.

Cliff Asai, a pastor of Resplendent Light Community Church in Santa Monica, volunteered to facilitate “I Am” and said the project drew about 350 participants.

“The whole idea is to see the connectivity of people who come into Santa Monica,” he said, “and what we’re trying to show is that Santa Monica is a very connected community, and the people here share something in common with one another.”

Overall, Asai said he hoped people left the Santa Monica National Night Out feeling more bonded than when they arrived–both with police officers and among each other.

“We have more in common than we have differences. If we concentrate on that and have that be the focus, our common love for this area can be something very positive,” Asai said.