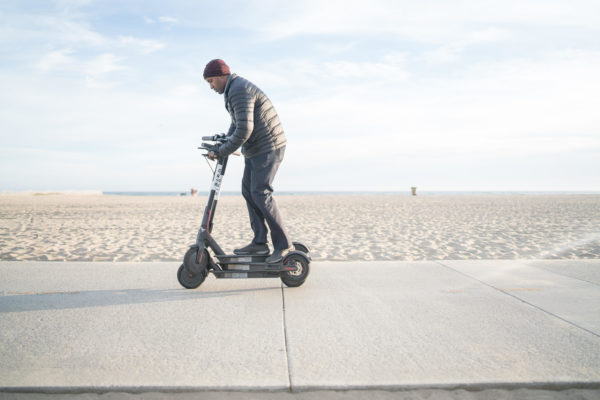 Scooter chargers could be impacted by City’s scooter policy.

In recent months Bird scooters have been in a battle with the City of Santa Monica to remain on the streets. It seems people either love them or hate them, but in the midst of all the controversy, one group of people have been overlooked, at least by the public: those who rely on the Bird scooters as a source of income.

There are hundreds of people who have signed up to be Bird chargers, since the company launched in Santa Monica in September of last year.

Chargers receive power supplies from the company, which allows for two to three scooters to be fully charged per day. Chargers can pick up the scooters after 8 p.m. when they are powered down to the public and take them home to charge overnight.

Bird pays from $5-$20 per scooter and promises to pay the next day for work that was done the previous night. The charging community quickly grew from a handful of people when it first started, to hundreds who rely on it for full-time work.

There’s a large online community of Bird chargers that provide support and helpful tips to each other. Area-specific communities can be found on Facebook by sending a request to join the group, or publicly on Instagram.

Chargers are also responsible for deploying the scooters back into the public in strategic locations referred to as ‘nests’.

Adam Kramer, signed up to be a Bird charger at the end of December 2017 and has since started his own logistics company, Kramer Logistics, to support what Bird does.

In the past four months, Santa Monica City Council has opened meetings about Bird and dockless transportation options to the public to hear opinions from riders and chargers. Kramer spoke at a meeting in Santa Monica and another for LA county.

“It was up to chargers and riders to get out there and talk about what Bird means to them as a transportation option, and an option for how to make money,” Kramer said.

Scooter restrictions in Santa Monica would have a huge impact on him personally, he said, because he currently has 10 employees and a fleet of vans. Santa Monica is one of the largest markets for Bird scooters.

“I made it very clear for the Council that this is something that not only I rely on, because I utilized the gig economy to grow my own business, it’s something my employees rely on, and hundreds of people rely on every day to be able to live in Santa Monica,” Kramer said.

Bird announced Tuesday morning that in conjunction with Lime, there would be “A Day Without A Scooter” and service would be unavailable in Santa Monica. Their aim was to show City Council how those who live and work in Santa Monica depend on the electric scooters as a means of transportation.

Last week, the City proposed that Bird and Lime’s permits not continue past September, proposing two new companies. These companies are owned by Uber and Lyft respectively.

Bird and Lime supporters met outside City Hall in Santa Monica Tuesday night to encourage the Council to continue operations with the companies.

One man named Dan spoke to the crowd how he sold his car a few months prior and relies on the scooters for transportation.

“If you’re going five or less miles, there’s absolutely no need to drive,” he said.

Some issues that were raised during the rally included the city having more transparency with its residents during the process of choosing which companies to grant permits to. Supporters stressed the desire to keep the permits with local companies like Bird, as they also have history with scooters, unlike Uber or Lyft.

Supporters spoke about how Bird and Lime benefit the environment, eliminate the price of gas or car insurance and tourists have been enjoying them.

One woman broke into tears while explaining to the crowd that working as a Bird charger allows her the flexibility to care for her son with special needs.

“It would be a lovely thing if we could all somehow come to a resolution where we can find a way of working together, so we can collaborate and be eco-friendly, without it being an issue,” she said.

Bird and Lime have resumed their operations in Santa Monica.

Special thanks to Christy Schnabel for the photo for this article. To see a gallery of their collection of scooter photos in Santa Monica, visit www.christyschnabel.photography.com