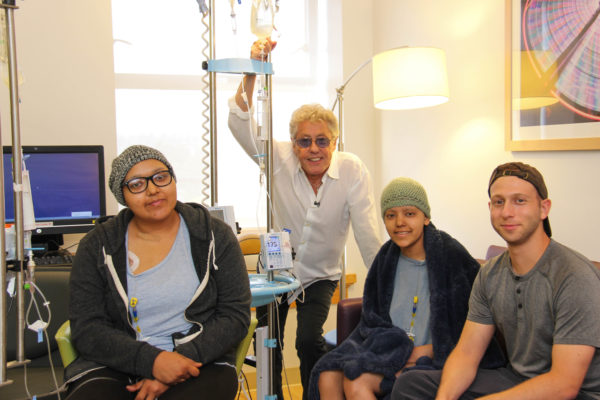 The UCLA center, dedicated to supporting teens’ undergoing cancer treatment emotional as well as medical needs, opened five years ago and was the first of more than a dozen U.S. hospitals that have since established a center for these specific needs.

While visiting these teens, Daltrey gave some impromptu tips on guitar-playing, signed concert posters and visited with patients, families and hospital nursing staff. When he was there, he had a patient named Noah play a few bars of “Teenage Wasteland.”

“Roger talked to the patients, asking if music helped them get through treatment, and also about the importance of the support of other teens and young adults going through a similar experience,” said Simi Singer, a Marketing and Media Analyst at UCLA Medical Center.

Roger Daltrey has long been at the forefront of fighting cancer in teens and started the Teen Cancer Trust in the UK more than 20 years ago to give back to his teenage fans. The success of this non-profit, as evident in the development of dozens of hospital programs for teens and young adults with cancer – led to the establishment of a U.S. arm, Teen Cancer America. This past weekend, Roger was joined by music legends Van Morrison and Ed Sheeran for a private fundraising concert that raised funds for UCLA Health and Teen Cancer America.