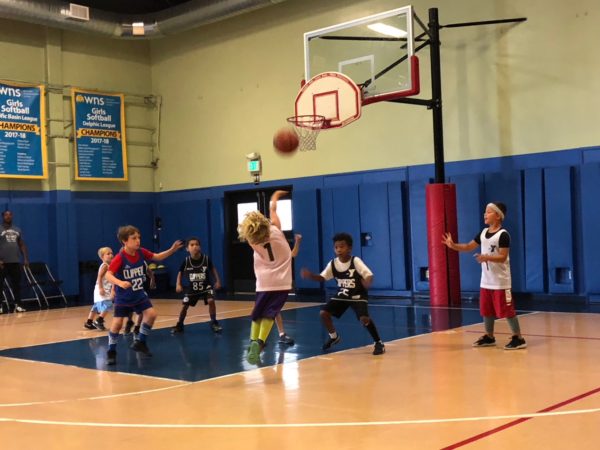 The Santa Monica Under 7 Stars are back to their winning ways, a week after they saw their undefeated run come to an end, with a resounding 27-6 victory over the Culver-Palms Pythons, in summer YMCA youth basketball action last weekend.

“The Stars dominated the boards, with a rebounding edge of more than double their opponent. This past week at practice, rebounding was emphasized, as well as returning on defense as quickly as possible when there is a turnover,” said Coaches Paul Drew and Karim Mikhail. “The Stars definitely were paying attention in practice, because all 13 players that played in the game had at least one rebound, and the defense was very impressive.”

Leading the charge for the Stars was Noland Piippo who had a game-high eight points. In addition, Piippo demonstrated defensive prowess with nine rebounds, tying Monika Diaz for the rebound high for the game. Diaz was impressive offensively as well, scoring seven points and according to the coaches “put her dribble skills on display, by zooming by the opponents.”

The Stars got off to a quick start, aided by Erol Besincioglu who converted an “And 1” after being fouled on a made shot in the first quarter to help put the Stars up 9-0 at the end of the quarter.

Also scoring for the Stars were Gavin O’Brien, Miles Franklin and Michael Mikhail.

With strong performances across the board, picking a standout performer was tough but Coaches Drew and Mikhail both pointed to Noah Levy’s game as particularly stellar.

“The most impressive performance came from our youngest player Noah Levy who not only scored his first point ever by converting a free throw, he filled up his stat sheet with steals, rebounds, assists, and a block,” Coaches Paul Drew and Karim Mikhail said. “Noah had three assists in the game, which is an amazing accomplishment for any player in the U7 division, and showed how passing the ball around helps the entire team to succeed.  When the game was over, Noah was more proud of having a block in the game, than any other stat that he obtained.”

A reminder that there are still some spots available for the Fall Santa Monica YMCA youth basketball league. Sign up at the YMCA or on their website at http://welcome.ymcasm.org/.League is open to boys and girls, ages 5 to 14.