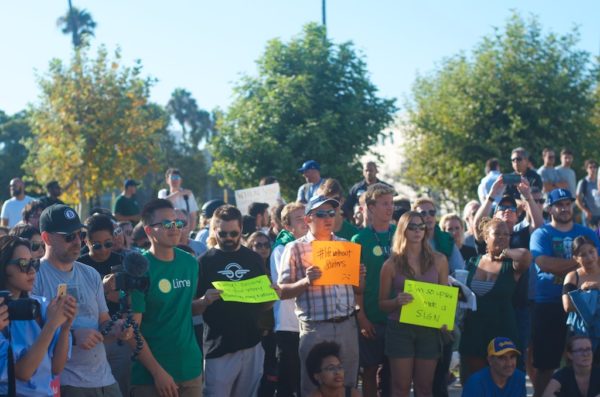 Scooters are always a hot topic in Santa Monica but this week the heat got turned up a few notches when Bird and Lime both temporarily suspended service on their devices in a symbolic protest.

On August 7, the City of Santa Monica’s Shared Mobility Device Selection Committee released their rankings of potential operators for the upcoming Shared Mobility Pilot Program which will begin on September 17. Bird and Lime are ranked 10th and 4th respectively. The Committee is recommending that David Martin, the City’s Director of Planning and Community Development, select only the top-two operators: LYFT and Jump. LYFT scooters are owned by the company that operates Lyft, the ride-hailing service. Uber owns jump.

In response to this, Bird and Lime sent out a letter to users saying the company would shut down scooters Tuesday to protest the City’s actions while calling on users to attend a rally outside City Hall on Tuesday before the start of the Council meeting.

“Last Friday, the City released the initial staff recommendations of its current procurement process for shared electric scooter operators, proposing to award permits to two other companies, removing Lime and Bird—the only current operators in the City—from Santa Monica.  The proposed companies have no history of operating shared scooters in any city,” the joint statement read.

There was no item on the Council agenda regarding scooters and City Officials noted at the start of the meeting that City Council had already considered scooters at their June 26 meeting when they approved the Shared Mobility Pilot Program. The decision now rests in the hands of the City’s Planning and Community Development Director David Martin.

“The Council is not the body that makes the decision on e-scooters,” said City Manager Rick Cole said, adding “We anticipate the selection of two e-scooter companies.”

In the rankings, Bird and Lime both scored low marks for compliancy. Both JUMP and Lyft scooters scored higher when it came to compliancy, which some people question since neither JUMP norLyft scooters are operable yet and so, therefore, have had nothing to comply with. In addition, Lime said that they have worked with the City of Santa Monica in the past to ensure compliance and argued that their experience makes them a better choice.

“As the most experienced shared bike and scooter company in the United States, we are disappointed by the City’s current proposal because Santa Monica riders deserve access to best-in-class technology. We have on-the-ground experience operating shared scooters in Santa Monica and around the world, giving us the greatest readiness to fulfill the needs of residents without interruption when the pilot program begins,” wrote Toby Sun, Lime CEO in a press release.

The final decision will be made by the City’s Planning and Community Development Director David Martin, who will decide based on the applications, the selection committee’s recommendations and public comment. Public comment was open through Friday, August 17 and the decision is expected in the next few weeks.