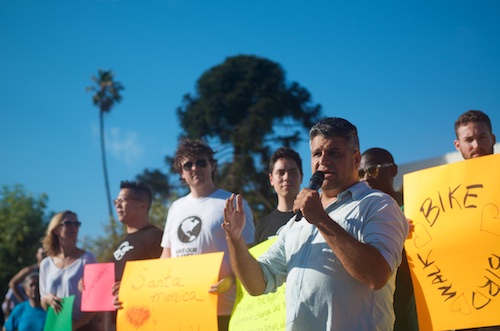 Temporary suspension of service was a protest by Lime and Bird against City’s pilot program.

Scooters are set to return to Santa Monica tomorrow after Bird and Lime temporarily suspended service in a joint protest against speculation that the City of Santa Monica may choose scooter services owned respectively by Uber and Lyft for their Shared Mobility Pilot Program. The announcement came from David Estrada, Chief Legal Officer for Bird at a rally outside Santa Monica City hall Tuesday afternoon.

“We are going live again,” Estrada said at the rally, which was organized by Bird and Lime.

Service is expected to begin again tomorrow. The temporary suspension of service was an attempt by the scooter companies to demonstrate how reliant the devices residents and commuters in Santa Monica have become.

At the regular City Council meeting immediately following the rally, City Manager Rick Cole and Mayor Ted Winterer told the audience, which included scooter supporters from the rally, that they would have to wait until all other Council business was completed to give input about scooters, since Shared Mobility was not on the agenda.

In addition, City Manager Cole said that the Council has already considered scooters at their June 26 meeting when they approved the Shared Mobility Pilot Program. The decision now rests in the hands of the City’s Planning and Community Development Director David Martin.

“The Council is not the body that makes the decision on e-scooters,” Cole said, adding “We anticipate the selection of two e-scooter companies.”

Check back tomorrow for full coverage of the rally and any Council action that may occur tonight. Watch a video of the full rally below.