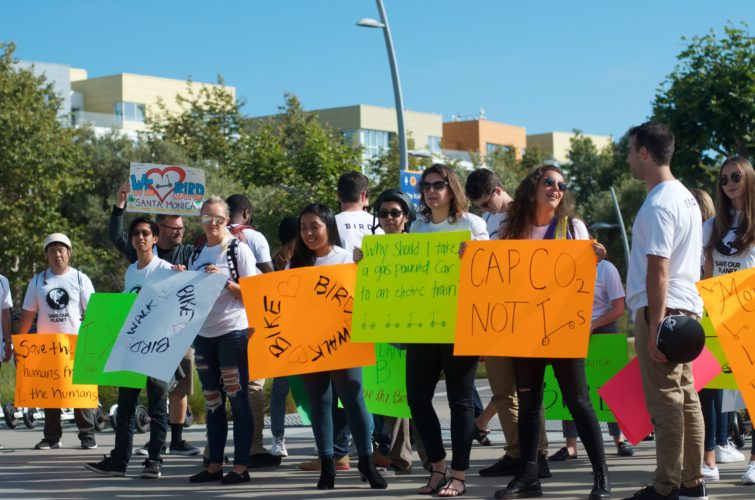 Bird and Lime organize “Day Without a Scooter” to protest City’s Pilot Program.

There are no scooters today in Santa Monica, as Bird and Lime have made their devices unavailable in a symbolic protest against the City’s potential omission of both the companies in their upcoming Shared Mobility Pilot Program.

On August 7, the City of Santa Monica’s Shared Mobility Device Selection Committee released their rankings of potential operators for the upcoming Shared Mobility Pilot Program which will begin on September 17. Bird and Lime are ranked 10th and 4th respectively. The Committee is recommending that David Martin, the City’s Director of Planning and Community Development, select only the top-two operators: LYFT and Jump. LYFT scooters are owned by the company that operates Lyft, the ride-hailing service. Jump is owned by Uber.

In response to this, Bird sent out a letter to users saying the company will shut down scooters today to protest the City’s actions while calling on users to attend a rally outside City Hall today at 5 p.m. before the start of the regular City Council meeting.

“All Birds will be unrideable starting today and will return depending on the outcome of the City Hall meeting on Tuesday at 5:00 p.m.,” Bird wrote. “Join us at 5:00 p.m. on Tuesday in front of Santa Monica City Hall to show your elected officials that you support Bird in Santa Monica.”

Following the letter from Bird, a joint press release was sent out by Lime and Bird further criticizing the City’s ranking of potential scooter operators.

“Last Friday, the City released the initial staff recommendations of its current procurement process for shared electric scooter operators, proposing to award permits to two other companies, removing Lime and Bird—the only current operators in the City—from Santa Monica.  The proposed companies have no history of operating shared scooters in any city,” the joint statement read. “Both Lime and Bird scooters will be unrideable on Tuesday throughout Santa Monica for a ‘Day Without a Scooter,’ demonstrating the community’s reliance on the scooters.”

There is no item on the agenda relating to shared mobility, however, and according to the City, there is no official way for the public to weigh in until the end of the City Council meeting.

“There are no agenda items at tonight’s City Council meeting related to e-scooters and dockless mobility,” wrote Constance Farrel, the City’s Public Information Officer in an email Tuesday. “The only way to provide public comment at the City Council meeting is at the close of the meeting as a 14 Item. That will likely come up between 11 p.m. and midnight, and those comments will not be a part of the official record for the Shared Mobility Pilot selection process.”

The final decision will be made by the City’s Planning and Community Development Director David Martin, who will decide based on the applications, the selection committee’s recommendations and public comment. Public comment is open through Friday, August 17 at 2 p.m. and can be submitted by emailing kyle.kozar@smgov.net with “Shared Mobility Pilot Program” in the subject line.