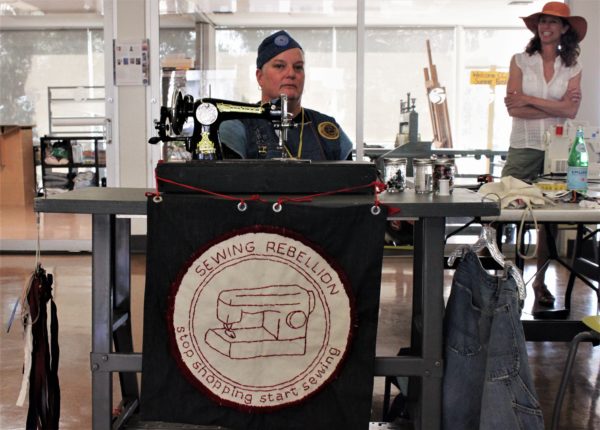 Saturday, August 11, Camera Obscura Art Lab welcomed back textile worker and activist Frau Fiber. Armed with sew machines, needles, threads and over a decade’s worth of sewing experience, Fiber returned with Sewing Rebellion. The free workshop is hosted every second Saturday, and is a space where attendees can work on unfinished sewing projects.

Inside the Camera Obscura an array of sewing machines lined the tables, with fabrics, needles, threads, buttons and sewing patterns spread across the workspace. The monthly sewing workshop encourages attendees to repair and repurpose clothing while also learning new skills in a collaborative environment. Frau Fiber, launched the workshop in Chicago back in 2006, and has hosted it across the country and around the world since. In winter of 2017 she hosted “Tailor Made,” a two-week popup project at Camera Obscura, which left a lasting impression on Cultural Affairs Supervisor, Naomi Okuyama. “[The popup] started on Black Friday and went through the beginning of December, and it was all about bringing a spotlight [to] fast fashion and shopping practices,” Okuyama stated. For the event Frau had created a “wheel of wages” that illustrated the wages earned by different garment workers around the world. Some countries represented included India, Cambodia and China. She then repaired garments that people brought in for those wages. “People participating in the project could see how little, really, [garment workers] get paid for all this amazing hand work.” It was at that time that Fiber spoke to Okuyama about the global and ongoing project Sewing Rebellion. Flash forward nearly a year later, and Fiber is now hosting a monthly sewing lounge.

Frau Fiber told the Santa Monica Mirror, “how Sewing Rebellion works is that there is always kind of a monthly statement or project; today was upcycling your jeans and making them into shorts with a zipper application. Often times nobody does that project, but there is always something to do or to inspire people to do… Mostly what people do is bring in their mending, or if they have a sewing project that they need assistance with. And we’re here with the expertise and the equipment.”

From libraries to “maker spaces” Frau has held the collaborative sewing project in a variety of locations. The tools and resources vary from location to location, but the expertise is a constant. “I sewed as a career, I worked in a sweatshop. And then I realized that it was a skill that people didn’t’ have anymore, and so I decided that I wanted to give it away. That was twelve years ago,” Fiber said.

Malissa Wise, was participating in the Sewing Rebellion for the first time, and had found out about the event through the City’s Seascape Community Newsletter. “I actually came here with nothing, and went back home and brought my projects back.” During the three-hour lounge, Wise had learned how to make buttonholes, which was the final step to complete a shirt that she had made.

In addition to Sewing Rebellion, Camera Obscura hosts artists-in-residence, such as Aparna Sindhoor and Lisa Diane Wedgeworth, craft workshops, and in December it will bring back Repair Café, which partners with Our Time Bank and the City of Santa Monica’s Resource Recovery and Recycling Division to keep items out of landfills.