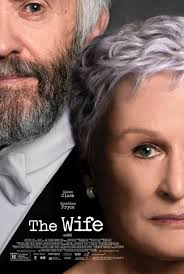 “The Wife” is a dark character study of relationships. Swedish director Bjorn Runge, along with novelist Meg Wolitzer and screenwriter Jane Anderson have created a brooding film framed by superb performances, that hints of the style of Ingmar Bergman. The characters speak words that belie the depth of emotional meaning that lies beneath them.

An interesting discussion followed the screening, with Meg Wolitzer who wrote the novel and screenwriter Jane Anderson. They noted that the first draft of the screenplay was written in 2004, and was not given the “green light” by producers, who felt that audiences would not embrace a film headlined by a strong female protagonist. The film finally was finally shot in late 2016 and premiered at the 2017 Toronto Film Festival.

Glenn Close gives a tour de force performance as Joan Castleman,  a devoted and highly intelligent wife who has spent her life supporting her husband’s literary career. She seems thrilled that he has achieved stardom in his art. The emotional and psychological drama that plays out reveals the forces and imbalance that lie hidden below this arrangement of power. Annie Starke, who portrays the young Joan, is actually the daughter of Glenn Close. Jonathan Pryce, as the writer, Joan’s husband, Joe Castleman, is excellent in this role of a man whose personality is much less complex than his partner’s. Max, Irons, Jeremy Irons’ son, shows great nuance as Joan and Joe’s angry son David.

Author Wolitzer noted that she believes that there is a code that a couple develops early in a relationship that allows them to function in tandem, and that if they stay together many years the code needs to be able to withstand changes or the bond unravels.  This is a story of a dramatic unraveling. It is about the tragedy of a woman consumed by anger and frustration, who has been misled by the social structure that surrounds her to believe that her lot in life, no matter what circumstances ensue, is to simply support her husband. In the end, The genuine fear that surfaces in Joe any time Joan is not by his side, illustrates what happens to a stable yet toxic relationship when a catalyst (Christian Slater’s character, “Nathaniel Bone”) enters the picture.

After you’ve seen the movie, find the official trailer online and watch the very first scene again. It will be an eye-opener. This scene will take on a whole new patchwork of emotion that you may not have noticed the first time you saw it. You will also realize the brilliance of the actors’ performances.