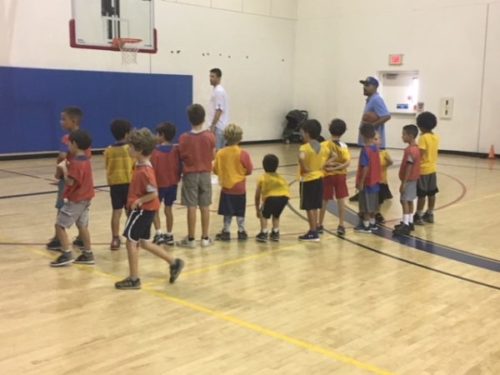 The Under 7 (U7) Santa Monica YMCA Stars basketball team won their game in convincing fashion over their Culver-Palms YMCA opponent this past weekend with a 29-7 victory.

For the second weekend in a row, the Stars out rebounded their opponent by a wide margin and had ten different players make a bucket in the contest.

“The Stars played an aggressive man to man defense that presented challenges to their opponent, by forcing them into turnovers that lead to fast break points for the Stars,” said Coaches Karim Mikhail and Paul Drew.

The Stars also displayed great ball movement by distributing the ball to all their teammates on all sides of the court and as a result, there was scoring from a wide range of players.

Dominic Drew, Monika Diaz and Vaughn Elliott, each made a basket.
Two buckets each were made by Michael Mikhail, Rayan Etemadnia and Miles Franklin.

Erol Besincioglu was the high scorer in the contest with five points, using his big frame to drive the ball to the hoop, and moving opponents out of the way.

Noah Hagooli had two assists and a bucket, Gavin O’Brien also had an assist. Coaches Karim Mikhail and Paul Drew after the game emphasized the value the Stars place on assists.

“An assist is as good as a basket, thus motivating players to pass the ball around to open teammates in position to score,” they said.

Monster games came from the youngest players Tristan Hayes and Noland Piippo, who both had a whopping 10 rebounds and a basket.

“These players play bigger than their size would indicate, by boxing out and aggressively snagging rebounds. An amazing performance by both of them, and it motivated the entire team to victory,” Coaches Karim Mikhail and Paul Drew said.

The Stars biggest test will come in their next game when they go against their rival, the Vampires.  Both teams have split their previous two meetings, and the league championship will be on the line in this contest.

“It will be a great matchup featuring the best of youth YMCA basketball,” Coaches Karim Mikhail and Paul Drew said.