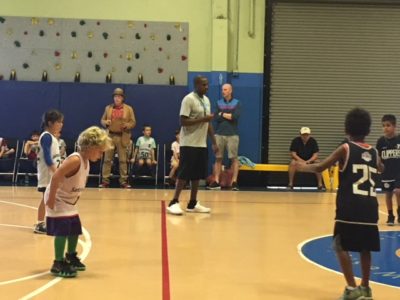 Under seven team off to a rocking start

Hoop fans in Los Angeles can’t wait until the 2019 NBA starts after the Lakers signed LeBron James. Hoop fans in Santa Monica, however, are already excited, as the Santa Monica YMCA Stats under seven team has started off their season on fire.

The squad is now 2-0 on the season after they defeated the Culver-Palms YMCA team Saturday, July 28 in a dominating 26-4 performance.

“The Stars put their passing skills on display by distributing the ball all around the court and finding players in open positions,” wrote Coaches Paul Drew and Peter Brown in an email. “All players demonstrated good ball handling and catching skills, along with graceful footwork and pivoting.”

In addition to their impressive offensive performance, the Stars kept Culver-Palms out of striking distance with stifling defense.

“The Stars play man to man defense that not only makes it difficult for their opponent to score baskets, but also teaches the players positioning and footwork, and more importantly, communicating with teammates on defensive assignments,” Coach Drew and Coach Brown wrote.

All fifteen players for the Stars had good performances and great sportsmanship. Dominic Drew had a career-high 10 points. Henry Brown scored eight points with a steller-around performance both offensively and defensively. Noah Hagooli and Ryan Etemadnia both had multiple assists while Noland Piippo, Miles Franklin, and Ryan Cohen also scored in the contest. In addition, outstanding defensive performances by Vaughn Elliott and Erol Besincioglu were displayed with their rebounding and coverage, keeping the Stars’ lead large.

Despite this resounding victory, these seven-year-olds have moved on and are gearing up for what may be a tight contest up next.

“Next week promises to be a challenge for the Stars, as they will face the only other undefeated team in the league,” Coach Drew and Coach Brown wrote. “We are looking forward to it.”