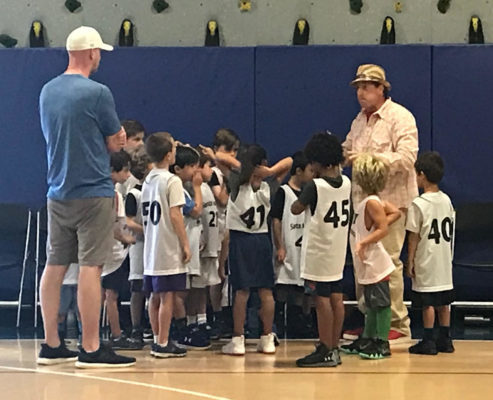 Second-half comeback not enough to overcome the Vampires.

All good things must come to an end as the Under 7 Santa Monica YMCA Stars basketball team found at last weekend when their undefeated 2018 season came to an end with a lost to a vastly improved YMCA Vampires team.

The Vampires jumped out to an early lead by outrebounding the Stars in the beginning of the game. The Stars were able to bounce back, however, in the second half of the game, successfully passing and spreading the ball around the court. The Stars outscored the Vampires in the second half but the deficit was too large to overcome as the Stars suffered their first defeat of the season.

After the game, YMCA Coaches Paul Drew and Peter Brown gave credit to the Vampires for their high level of play and said the Stars will learn from the experience.

“Kudos to the Vampires for playing a solid zone defense, and making a high percentage of their shots. Not even crosses or garlic were going to stop the Vampires from obtaining victory,” Coaches Paul Drew and Peter Brown said. “The Stars will learn from their defeat, and use this game as a building tool to becoming better players and teammates.”

Despite the loss, there was still stellar performances from members of the Stars’ team. Coaches Drew and Brown highlighted the performances of Vaughn Elliott and Michael Mikhail, who maintained a high level of play throughout the game, even when the deficit seemed insurmountable.

Also of note was that “The Voice’s” Pete Arbogast was in attendance at the game to keep stats and offer sound advice for the coaches and the kids.

“It should be noted, that Mr. Arbogast will be retiring soon from the directorship of Santa Monica YMCA youth basketball, the program that he resurrected in 2011.
All of us can’t thank him enough for his commitment and sacrifice to build an excellent program for the development of our younger generation,” Coaches Paul Drew and Peter Brown said.