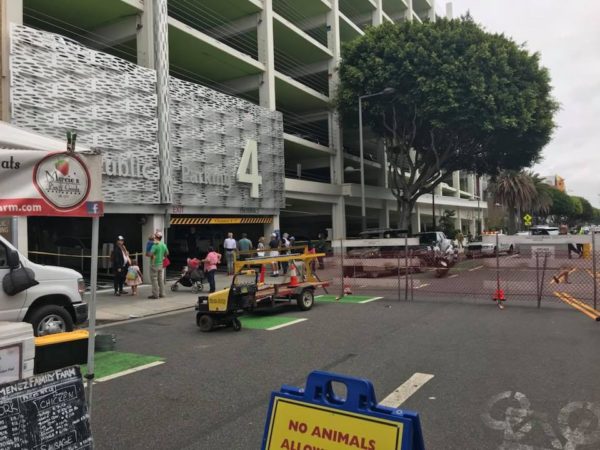 The Santa Monica Police Department (SMPD) have discovered the body of a man in City Parking Lot #4 on 2nd Street in Santa Monica between Arizona Avenue and Santa Monica Boulevard. According to the Police, the cause of death is believed to be suicide and there is no evidence of foul play at present time.

SMPD Sergeant Saul Rodriguez told the Santa Monica Mirror that victim was a man but could not specify the age of the individual. According to Sgt. Rodriguez, the man “jumped from an upper level” of the structure “trying to hang himself” but was decapitated in the process of hanging himself. As a result, police found the head and body of the victim in different parts of the parking structure.

This official account confirms a report of the incident on the Facebook group Residocracy Santa Monica, where group member Jessica Yingling posted a photo of the scene outside the parking structure soon after the incident with a caption describing what may have happened.

“One eyewitness is reporting that she saw a man jump off a building. One of my colleagues overhead a police over saying that it was either a suicide or accident and the person was decapitated,” Yingling wrote in the post.

Yingling told the Santa Monica Mirror that she did not see the incident occur but was waiting in line at Cava across the street and noticed police cars arriving, went outside and spoke with a man who saw the body first-hand.

Details are still emerging. Check the site tomorrow for an updated version.