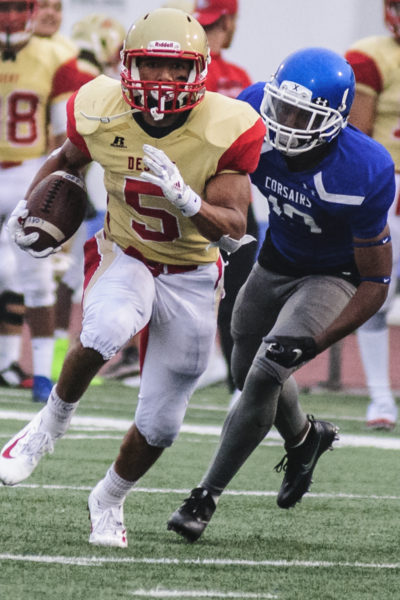 It was a foggy night in Santa Monica, when the Santa Monica College Corsairs football team stumbled in a 69-10 loss to the College of the Desert Roadrunners on Friday, September 7th.

The last time the Roadrunners won by a 59 point or greater differential was in 2001,  before many of the players on the field were even playing football. With the loss, SMC fell to 0-2 on the season while College of the Desert improved to 1-1.

The Roadrunners, living up to their name, got off to a quick start, scoring a touchdown within the first few minutes of the play and scored another touchdown soon after SMC found themselves down 14-0 at the end of the first quarter.

SMC got on the board in the second quarter with a 28-yard field goal by Dylan Missoul. Their only other points came when Dajone Averett scored a touchdown by receiving a 35-yard pass from Christian Cia.

SMC was outplayed by College of the Desert in virtually every category. The most striking difference came in total offensive yards with the Roadrunners racking up 698 while the Corsairs collecting only 94.

Up next for SMC is Bakersfield College for an away game on September 15. The Corsairs’ next home game is versus Compton College on September 22 at 1 p.m.