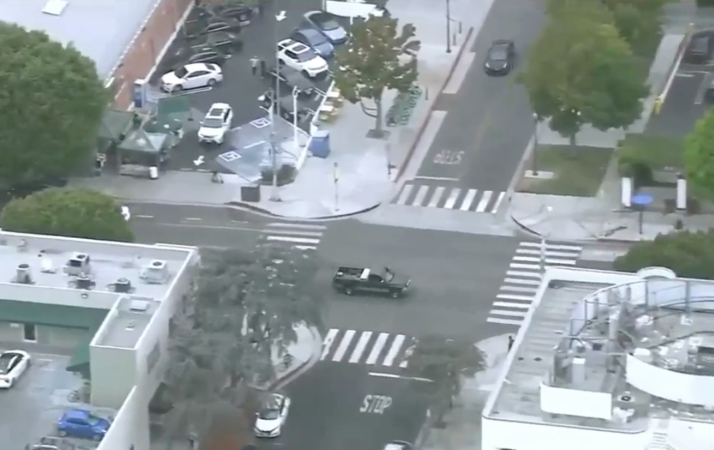 LAPD officers chased the suspect, who was driving a dark green pickup truck, from Tarzana in the San Fendernano Valley all the way into Santa Monica.

Around 5:20 p.m. the suspect got on the 405 South Freeway where at the time traffic was nonexistent. 15 minutes later, the suspect exited the 10 Freeway at 4th Street in Santa Monica.

After taking Montana Avenue all the way into West LA, the chase finally ended in the Ralphs parking lot on Wilshire Boulevard and Bundy Drive in Brentwood. The truck stopped in front of the grocery store’s entrance before the driver exited the vehicle without incident. After the driver exited the car, a passenger also exited the car. Both men were taken into custody at 6:10 p.m.

At one point during the chase, according to helicopter footage, the driver appeared to smoke something out of a bong while driving.

According to the LAPD, the double murder suspect is believed to have been the passenger during the chase. The suspect, 39-year old Gregorio Garcia, has been arrested for murders that occurred in February of 2018. According to  Captain Paul Vernon, the murders took place in the LAPD Rampart Division which includes Silverlake and Echo Park. At the time of printing, officers were not able to provide much information about the case but said that the murders were narcotics related.

Details are still emerging in this case so check the online version of the article at www.smmirror.com for the most an updated version.