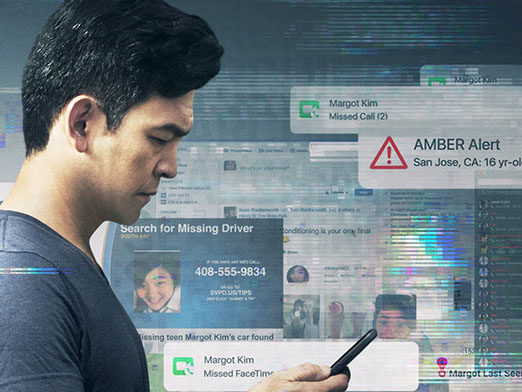 For his first feature film as a writer/director, Aneesh Chaganty has successfully debuted a groundbreaking concept with “Searching”. The story is told entirely from computer screen capture and it works! The film premiered at Sundance 2018 last January and was an audience favorite, winning the Best of Next Audience Award and the Alfred P. Sloan Feature Film Prize. The takeaway from this movie, rather than tremendous production value in sound and visualization, is that the story is told in a familiar form of communication never before used to tell an entire story on screen. The narrative is told through from text messages, video calls, emails and Facebook trails. You will find that the very language that annoys you and interrupts your concentration through electronic devices colors your level of emotional disturbance as you are watching the film.

John Cho turns in a fantastic performance as the father who is in danger of losing his only daughter. His facial expressions are subtle and painful as he reads email, text and Facebook messages. Debra Messing is also excellent in a role quite different from her Will and Grace character, although her role could have been better developed by the writers to show the arc of her transformation.

Following my screening, director/writer Chaganty and writer/producer Sev Ohanian revealed that they had shot the film in 13 days. The planning, storyboarding and editing of the project took two years, however. Each day the pair would take a 20-minute break to watch classic films with a theme of a stolen, kidnapped or lost child. In the end their story resembles an Alfred Hitchcock classic. Here computer screenshots generate love, terror, panic, anguish and relief – all the levels of a story told in normal cinematic fashion. This style of narrative on film will not replace other styles. However, it may be used more often to add emotions generated by our electronic language recognition.