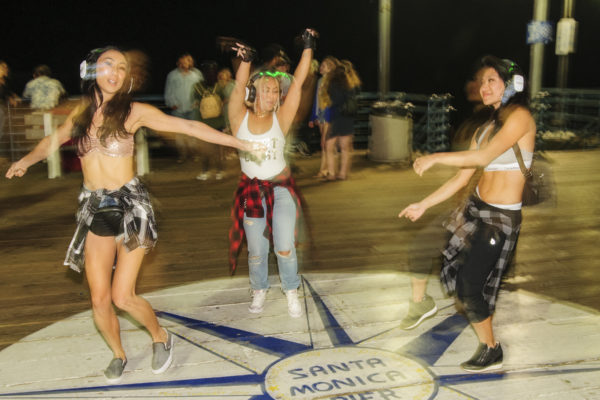 While the Santa Monica Pier is always a happening place, on a recent weekend it was happening and groovin’ as well.

On a September Saturday night, the West End of the Santa Monica Pier was home to a HUSHfest silent dance concert. In this event, patrons wear custom silent disco headphones while multiple DJs spin tracks through multiple channels for dancers and

concert-goers to tune into. With these DJs battling for supremacy, the latest Hushfest was the place to be Saturday night. With hundreds of people dancing in silence, passersby must have been wondering what everybody was grooving to.

“For our last HUSHFest of 2018 on the Santa Monica Pier we had over 400 hundred people come out and enjoy one of the most beautiful sunsets of the entire summer while listening to the Hip Hop classics from across the land,” said Josh Brooks of Hushfest  “Our headliners  Everyman and J Brave on the West Coast Channel, Jayda B and Bianca Oblivion on the Dirty South Channel and Subsuelo crew on the East Coast Channel all held it down and represented their respective regions with style and class.”

In the early 2000s, silent discos become popular in Europe but it wasn’t until DJ Robbie Kowal started Silent Frisco (which later became HUSH) that these quiet dances started to become widespread in the United States.

While the silent disco at the Pier last Saturday was the last HUSHfest of 2018, HUSH is constantly putting on silent discos throughout the state. Visit https://www.hushconcerts.com for more information.

By admin September 27, 2018
in Life and Arts, News
Related Posts