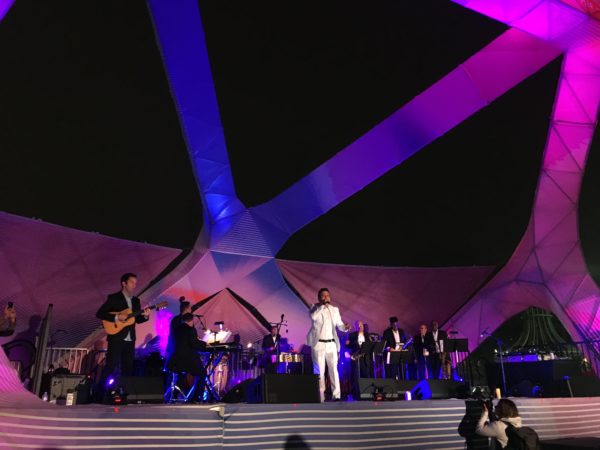 The Twilight Concerts series on the Santa Monica Pier kicked off Wednesday night with Latin Waves.

It was a chilly night in Santa Monica, with a gloomy sky, but residents were excited to check out the changes this year would bring to the popular event.

After large crowds from last year presented safety concerns, the City and the Pier Corporation came to an agreement to move the event until after labor day, and keep the event on the pier’s deck.

Upon walking down the pier, guests were surprised to see metal detectors set up at each entrance. Bag checks were also conducted as concertgoers walked through the metal detectors.

Some guests upon seeing the lines to walk through security decided to turn around.

“We don’t have a bag, should we still go?” one concertgoer asked.

“The one thing I liked the most: there’s a lot of police so you feel safe,” west LA resident, Armine Jaff said.

The event was divided into three areas: Main Stage, Pacific Park Stage and West End stage. With three stages, there was never an overwhelming crowd in any one area.

The main area felt very open. There were no overly large crowds or long lines at any of the vendors. This year, the event took a more local approach, featuring many local artists and their work.

The beer garden was a popular hangout spot. Before entering, security checked IDs and gave wristbands for entrance.

Jarina De Marco performed on the main stage at 6:30 before Orquesta Akokan took the stage at 8:15.

De Marco performed her song “Malcriada (Lady Like)”, which she told the audience essentially means being called a brat, something that was frightening growing up. But, it also means “rebellious,” and to her, it’s a song about challenging gender roles.

Members of Orquesta Akokan flew in from Havana, Cuba and New York the morning of the concert to perform. It was the band’s first time in Santa Monica.

To get to the other stages, you had to leave the main area and walk towards the end of the pier. The second stage, located in Pacific Park, is a small and intimate stage tucked away behind the Coffee Bean. The area, though small, was packed with a high-energy crowd, eager to see Latin-pop band Sister Mantos.

The West End Stage, where Quitapenas was playing was located at the very end of the pier. The smaller stages had a lower sound, but the audience didn’t seem to notice, and if they did, they didn’t care. At each stage set up, people were dancing with their children, their significant others and friends, having a good time, enjoying the high energy performances.

There were a few blankets set up on the beach, but nowhere near the amount of last year, where one would see blankets sprawled out in every direction on both sides of the pier.

Santa Monica resident, Layna Bingo, said she misses having the concerts in the summer. Part of the fun, she said was bringing a blanket down to the beach and getting to hangout, but she is glad that she came tonight, because she enjoyed the band.

“The fun of it was going to the beach, bringing a blanket and hanging out,” Bingo said.

The Twilight Concerts will run every Wednesday until Oct. 7. For more information and full line ups, visit santamonicapier.org/twilight.

By admin September 7, 2018
in Life and Arts, News
Related Posts