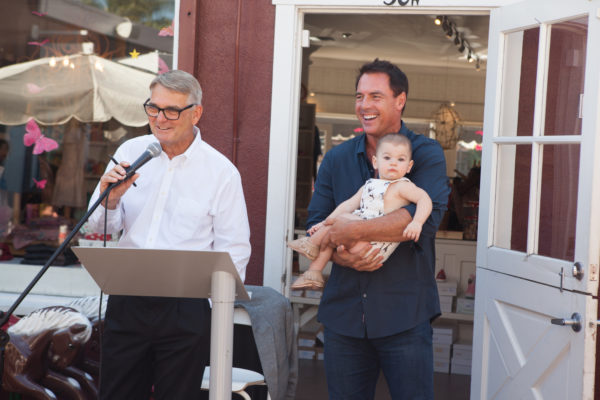 At a special book signing on Sunday afternoon hosted by Diesel bookstore in Santa Monica, about 80 people gathered round as Dr. Hamilton introduced his ghostwriter, Sally Collings, and thanked her for walking him through the book writing process and helping him organize his thoughts. He also introduced Mark Steines, former host of Entertainment Tonight, who narrated the audio version of 7 Secrets. Friends and fans stayed to congratulate Dr. Hamilton as he autographed copies of the book for them.

Collings, who has ghostwritten or co-written a number of books, including several memoirs, some books on business, and a previous book on parenting, said she enjoyed working as Dr. Hamilton’s ghostwriter and appreciated how articulate he is.

“Dr. Bob has such a way of communicating and telling a great story,” she commented. “He’s very passionate.”

In between greeting guests at the book signing, his wife of 45 years, Leslie Hamilton, remarked that she had been impressed with the discipline he demonstrated through the writing process.

“I have to say, I was amazed at his determination, getting up every day at 5 o’clock [to write] for two years,” she noted. “He just did it.”

In his remarks Sunday, Dr. Hamilton said the book is meant to push back against today’s popular advice that you should wait to have children until your career is secure, you’ve traveled the world, and you are settled.

“The narrative in the culture today is, children are great, but they can wait,” Hamilton said. “[But] if you push it too far back and you follow that narrative and do all the things that people are telling you to do, you’re going to end up in your mid-30s having your first child. And I will tell you that a lot of people who come to me are exactly that, and they look at me and with a tear in their eye they say, ‘Why didn’t anybody tell me how much of a joy it is? Why wasn’t I told to have children earlier?’”

Hamilton bases his “7 secrets” on his 34 years of experience as a pediatrician, as well as his own experience having children when he was still finishing his medical training and he and his wife Leslie were neither particularly well off (they were still paying off student loans) or “settled in life.” A father of six and grandfather of seven, Hamilton knows and has experienced both the joys and challenges of having children and he feels that the joys outweigh the difficulties. He encourages people not to feel bound to get all the latest gadgets for their babies, but instead to live simply and realize that what babies really need isn’t fancy gear but their parents’ love and attention.

“Right now, [for most people] kids are kind of on the back burner,” he said. “I’m trying to move them to the middle burner. Maybe I won’t be able to move them to the front burner, but I’m trying to move them forward, in terms of priorities, and letting people know that children are really important. They fill your life with incredible joy. They light up every room they come into. They are a lot of work, but there are dividends that you collect by being a parent.”

By admin September 11, 2018
in Life and Arts, News
Related Posts