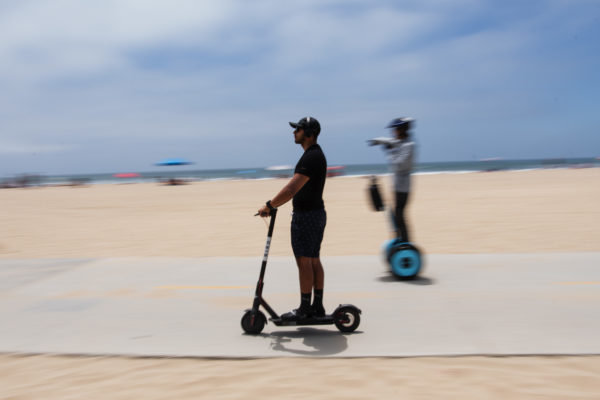 A week after the City of Santa Monica selected Bird, Lime, Uber and Lyft to be the operators in the City’s Shared Mobility Pilot Program, the City of Los Angeles passed scooter regulations of their own on Tuesday, August 4. With these two cities sharing many borders, it remains unclear how Los Angeles and Santa Monica will enforce their respective sets of regulations.

The motion passed the by Los Angeles City Council with a 13-0 vote on Tuesday, August 4 will limit scooter companies to 3,000 devices each within the City. Companies may add 2,500 devices in disadvantaged communities in Los Angeles and an additional 5,000 devices in disadvantaged communities in the San Fernando Valley. These numbers are not set in stone, however, as the Council requested the Department of Transportation to report back on the optimal number of scooters needed to fulfill riders’ needs while avoiding overcrowding.

In addition to the limits on the number of devices, the rules passed by the Council set a 15 miles per hour speed limit on scooters and e-bikes and requires companies to carry a $5 million liability insurance policy.

“The set of comprehensive and enforceable rules strike a balance between allowing dockless vehicles as a convenient, zero-emission form of short-trip transportation and holding dockless companies and users accountable for bad behavior,” wrote L.A. City Councilmember Mike Bonin in a Facebook post on Tuesday.

Bonin represents much of West L.A. where scooters concentrations are often the greatest of anywhere in the City but under the 3,000 per company cap, these numbers may decrease in areas like Venice that border Santa Monica. It remains unclear how Santa Monica and Los Angeles will control the influx of scooters coming across their borders. According to Bird, the company currently deploys 8,000 scooters throughout Los Angeles and estimates place the number of Lime scooters in a similar range.

Despite this potential for a reduced fleet size, Lime told the Santa Monica Mirror that they support the regulations passed by City Council.

“Lime welcomes the Los Angeles City Council’s approval earlier today of new regulations allowing companies to provide enhanced mobility options for the city’s residents,” a Lime spokesperson said. “In light of the council’s approval, Lime will obtain a conditional use permit to allow more of its affordable e-scooters and bikes to be available for local residents to use.”

At the present time, Bird has not responded for a request for comment.

The rules passed by the Council Tuesday do not limit the number of scooter companies that can apply to operate in the City but does set a 500 device minimum for any company wishing to deploy scooters or e-bikes. Companies are also required to work with local councils if requested to develop geo-fencing technology to prevent scooters from being misused on sidewalks and public right of ways.