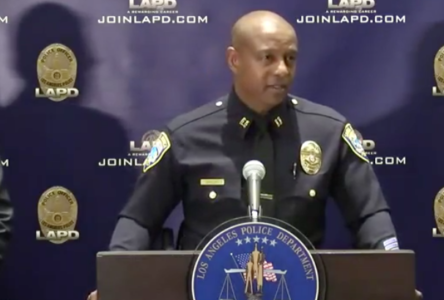 “Escobar faces a possible maximum sentence of life in prison without the possibility of parole or death if convicted as charged. A decision will be made at a later date on whether to seek the death penalty,” said the Los Angeles County District Attorney’s office in a press release.

On Wednesday, September 26, SMPD and LAPD detectives presented to the Los Angeles County District Attorney three counts of Murder and five counts Attempted Murder against the 49-year old Escobar. The criteria for somebody to be labeled a serial killer is three or more victims. Four of Escobar’s crimes, including one murder, occurred in Santa Monica.

“He also faces special circumstance allegations of multiple murders and murder during the commission of a robbery, making him eligible for the death penalty,” Los Angeles County District Attorney’s office says.

In addition, the Houston Police Department (HPD) believe Escobar may be responsible for the late August disappearance of his two relatives, Dina and Rogelio Escobar. After questioned by HPD detectives on August 30, Escobar fled Texas for California.

Soon after arriving in Los Angeles, Escobar is believed to have committed the first two Santa Monica attacks. Both of these attacks occurred on Santa Monica Beach to sleeping homeless victims.

“On September 8, at around 6:45 a.m., a male victim was discovered in the 1800 block of the beach suffering significant head trauma. The injuries were consistent with blunt force trauma,” reads an SMPD press release.

Two nights later, police believe Escobar is responsible for another attack on a homeless man at the same beach. The injuries were again consistent with blunt force head trauma. While the first victim has been discharged from the hospital, the second victim remains hospitalized in critical condition in a coma.

In working closely together, the LAPD and the SMPD believe that Escobar traveled to Downtown Los Angeles and is responsible for the September 16 murders of 59-year-old Kelvin Williams and 24-year-old Branden Ridout. Both Williams and Ridout were homeless and suffered blunt force trauma injuries to the head. Both attacks took place on Flower Street at night. In addition, the LAPD believes Escobar attacked that night a third man found with severe injuries to the head.

Four nights later, Escobar is believed to have returned to Santa Monica and murder Steven Ray Cruze. Cruze’s deceased body was found underneath the Santa Monica Pier at 6:45 a.m. on September 20 with blunt force trauma injuries to the head.

On September 24, another homeless male victim was discovered with blunt force trauma to the head on the 1500 block of 7th Street, and while searching the area, SMPD personnel located and arrested Escobar on the 500 block of Broadway.

“It does not appear that it was directed at any specific group. I think it was a crime of opportunity,” Hayes said. “It appears the motive in most of these cases was robbery.

Escobar’s criminal history includes a two-year stint in a Texas prison for burglary in the mid-’90s. In November of 2017, Escobar was arrested by Houston police officers for assault and again in February of 2018 for criminal trespassing. In addition, according to U.S. Immigration and Customs Enforcement (ICE) Escobar has been deported six times to El Salvador since 1988.

Deputy District Attorney Victor Avila of the Major Crimes Division is prosecuting the case. According to the criminal complaint, Escobar used a baseball bat or blunt object during the alleged crimes.

The case remains under investigation by the LAPD and the SMPD.