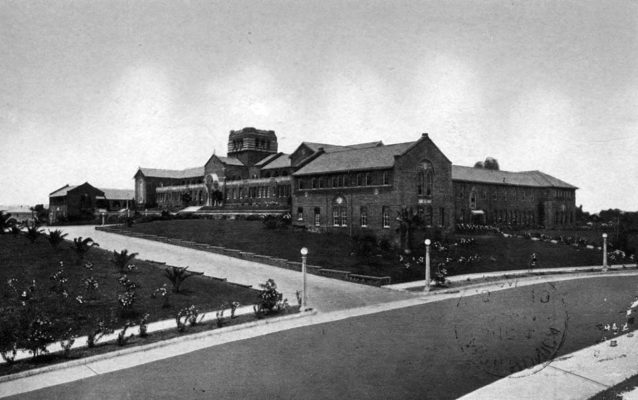 Fabric, Thread, and Glue – All great towns are held together not by the flashiness of their buildings and landscapes but by the people who inhabit them and the fabric of history they weave upon the city’s foundation. In Santa Monica we continually add more thread to the endless quilt that tells the story of our city by the bay. An important piece of our “quilt” began to be stitched together in 1891, as our city fathers realized our town needed a high school to call its own. Prospect Hill was chosen as the location, a compromise between the north and south sides of town. Thousands of students have graduated from Santa Monica High School over the ensuing 127 years, and their footprints are imprinted upon our community, our nation and around the world. They are the glue that helped shape our town.

The school has experienced change over the years. In 1921, the Memorial Open Air Theatre opened, and in 1924 the first students walked into the English Building. Today’s students still use both. Education needs continuously evolve, new buildings have risen and some have faced the wrecking ball. Samohi’s campus will look strikingly different five years from now, but the quality of the school’s graduates will continue to be exceptional. Principals like Barnum, Drake and Pearson made sure that students reached for the heavens in pursuit of meaningful lives. Samohi’s outstanding teachers have brought music to life, shown students the wizardry of math, inspired them to create world-class art and to light up the stage with stellar works. Over the decades, Typing, Home Economics and Print Shop have joined the historical dust heap of classes while a new curriculum adapted to the needs of the 21st Century has taken hold.

We estimate that there are over 50,000 living alumni of our city’s public high school. Many of them will gather in Samohi’s Science Quad on Saturday, September 15th, for the annual All Class Alumni Day Picnic and again on Sunday, September 16, at the Santa Monica Elks Lodge, for the Hall of Fame Induction Brunch. Both events begin at 11:00 AM and are open to the public.  Graduates from the1930’s through present day students are expected to attend. The award-winning band, choir, and cheerleaders will add to the celebration. The American Legion will add Medal of Honor recipient Joe Gandara’s name to the memorial plaque for students who fell during wartime. Santa Monica’s Elks Lodge will BBQ to raise funds for special needs children. It will be a great day to come home to Samohi.

On Sunday, the Samohi Alumni Association will induct five alumni into the school’s Hall of Fame. They join 51 grads that are already part of this illustrious group. Previous inductees include an astronaut, actors, ambassadors, athletes, artists, bankers, musicians, a sports photographer and a rear admiral. The new Hall of Fame inductees include:

Sandra Tsing Loh ’79 graduated from the California Institute of Technology with a Physics degree and is an associate professor at UC Irvine. She is well known as an author, a commentator and as a solo stage actor. She is a frequent contributor on NPR. Her books have won praise from both the New York Times and Los Angeles Times.

Jeremy Pal ’88 is a professor at Loyola Marymount University where his work earned him a shared Nobel Prize in 2007 as part of the International Panel on Climate Change. His work on climate change continues as he examines the way greenhouse gasses are affecting global temperatures.

Susan P. Crawford ’80 received her B.A. and J.D. from Yale University and is a Harvard Law professor specializing in Internet Law and Communications. She was the special assistant to President Obama for Science, Technology and Innovation Policy. Time Magazine has heralded Susan as one of the most influential minds in Technology.

Jon Arenberg ’79 is a former Samohi student body president and earned three degrees from UCLA. His B.S., M.S. & Ph.D. have served him well. He is the chief engineer for NASA’s James Webb Space Telescope. He has authored over 180 conference presentations, holds numerous patents, and is a champion weightlifter.

John Dahlem ’61 has completed the Explorers Grand Slam, for which he climbed the highest peak in each continent and reached both the north and south poles. He has been a teacher, wrestling coach, and school principal and received a Bronze Star for his military service during the Vietnam War.

Ben Allen ’96 is a former Samohi student body president and is currently a California State Senator representing Santa Monica. He earned his B.A. from Harvard, his Masters from Cambridge and his J.D. degree from UC Berkeley. He is a former President of the SMMUSD Board of Education.

Jan Steckel ’80 earned her B.A. from Harvard, studied at Oxford and received her M.D. from Yale. She became a noted pediatrician and a Peace Corps volunteer and then went on to win awards as a writer and poet. She is a noted advocate for the LGBTQ community and is passionate about helping the underprivileged and disabled.

John Beasley ’77 is a Grammy- and Emmy- nominated pianist, composer, arranger and producer whose accomplishments bridge musical and visual media. He has backed icons like Miles Davis, Herbie Hancock, and James Brown and has composed music for television and film.

SMart customarily discusses buildings, sustainability, and livability. This week’s goal was to turn your attention to the extraordinary heroes, those in the spotlight and those “behind the scenes,” who have risen from our public schools. For the past 143 years, Santa Monica has attracted exceptional people. Yes, we complain a lot. But this place, while it may appear to be overcrowded, crime-ridden and traffic-jammed, is still a magical place to live.

In 1927 composer Ken Darby penned the Samohi Hymn of Praise…”Oh Samohi, Dear Old Samohi, Queen of the Setting Sun…” Join us at this weekend’s events as we celebrate the fabric, the thread, and the glue that holds our city together. Saturday’s Samohi Alumni Day is free while Sunday’s Samohi Awards Brunch at the Santa Monica Elks Lodge, 1040 Pico Blvd, is only $40 per person and begins at 11:00 AM.

Santa Monica police make arrest near Starbucks on Main and Olympic A man was arrested after parking in the red...