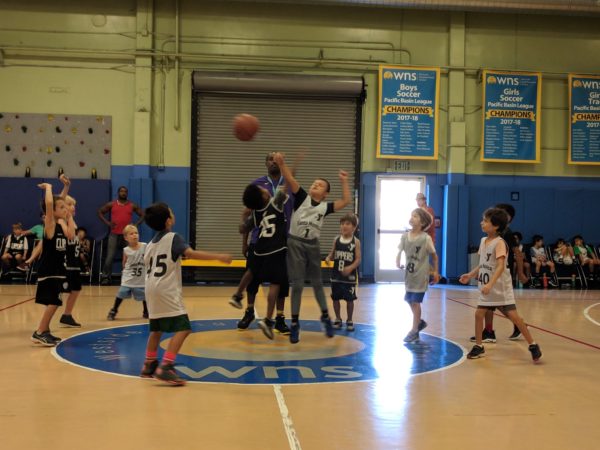 It was the final game of the season for the Under Seven (U7) Santa Monica Stars in the Culver-Palms summer YMCA basketball league. Having already clinched the championship with last week’s victory, the Stars were looking to build on their skills and team play, in order to be prepared for the upcoming fall basketball season at the Santa Monica YMCA that begins this week.

With other fall sports starting this weekend, the Stars had only nine players for the game, but nine players that were dedicated and eager to display all that they had learn over this summer.

For this final game against the Culver Pythons, I told the Stars that there would be limited coaching on my part, and I wanted to have them communicate with each other about how they want to play defense, and set their offense. In other words, they were in control.
The Stars were excited to hear this.

The Stars responded with the best performance of the season, scoring a season-high 32 points, and only giving up 5 points, in an overwhelming victory with all nine players making major contributions. The most impressive statistic was the season high for any game of 10 assists by the Stars. It is rare to have any assists by a team at this age level, but to have as many as 10, is unheard of, and a credit to these young kids for showing amazing team play.

Furthermore, the Stars communicated among each other about how they wanted to play defense, switching from zone to man on man, without missing a beat. All I and the parents had to do, was watch in awe and amazement of how far these kids have come this summer, with their skills and team play.

Game-high scorers were Bella Kariger, Ryan Cohen and Erol Besincioglu with 6 points each. Points were also scored by Dominic Drew, Rayan Etemadnia, Miles Franklin and Gavin O’Brien. Noah Hagooli-Bolaños had the most rebounds and showed why he was our leader in assists for the season, with his unselfish play.

Noah Levy once again, showed why he was our most improved player of the season with his impenetrable defense, and amazing dribbling and passing skills.

It was a fun summer, and one that we will never forget. Many friendships were formed, and a love for the game of basketball that continues with this generation of youth.