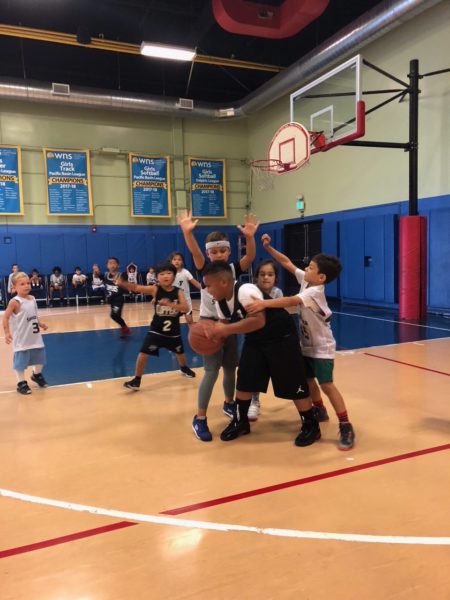 The Culver Vampires and the Santa Monica Stars met each other this past Saturday. The tension was high, the atmosphere was electric; this was to be the game to determine the league championship of the U7 Culver-Palms YMCA summer basketball league.

These two teams split their two earlier meetings this season, and a rivalry had been born. But with great competitive spirit and sportsmanship, these two teams played a hard fought, and well executed game, that featured the best of youth basketball.

The Stars were able to prevail with a 24-15 victory in a contest that remained very close through the first three quarters.

The game started off with a bang, when birthday boy Noah Levy dribbled in and launched a shot into the basket, thus immediately prompting the Vampires coach to call a timeout. On top of this, this was Levy’s first basket of the season, a nice birthday gift for himself. Throughout the rest of the game, he put on a dribbling clinic, that was making the Vampires dizzy trying to catch up with him.

The Stars switched to a zone defense this game, and it paid dividends, by forcing turnovers and winning the rebound battle.

The game remained close through the first three quarters, with the Stars only up by two points starting the fourth quarter. In the first part of the fourth quarter, the Stars built a large point cushion with an offensive surge, to allow them to have a comfortable lead in the last part of the 4th quarter, and ensure the victory. Congrats to both teams for putting on a fun and entertaining show of youth basketball.

Multiple players scored for the Stars, with top scorers being Dominic Drew and Noland Piippo, each with 6 points.

Monika Diaz, Michael Mikhail, and Henry Brown each had a basket.

In the important category of assists, Noah Hagooli-Bolaños and Rayan Etemadnia each had two and Ryan Cohen had one.

Bella Kariger had an outstanding defensive performance, stifling any attempts by any Vampire to get past her, by blocking and stealing the ball right out their hands. She must have been wearing garlic for the game.

Our player of the game was Miles Franklin who not only had two baskets, but had the job of containing the bigger and taller Vampire players. As much as the Vampires pushed and shoved Miles (and gave him the Charles Barkley treatment) he would not be intimidated, and he stood tall and strong, blocking shots and grabbing rebounds, and was the pillar of strength for the Stars.

The Stars will play one more game this season. With a guaranteed league championship already in hand, the Stars will be featuring more of their younger players in the next game, and continue to build on their skills, team play, and communication and enjoyment of the game of basketball.