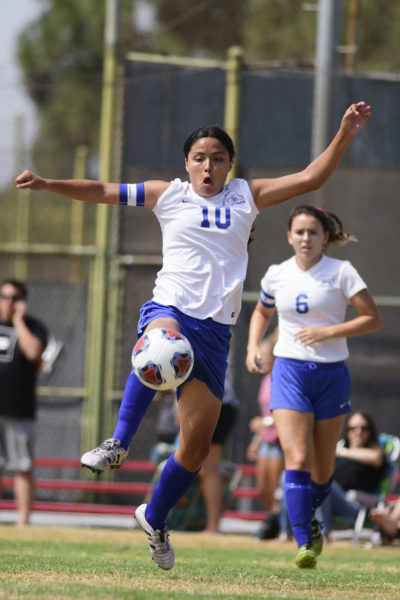 4-1 on the season with victory over Mira Costa College.

Versus Long Beach City College last week, SMC got off to a quick start, scoring three goals out the gate to command the lead. Ceirra Little led the scoring for SMC with two goals. Other goals came from Filippa Struxsjo, Antoinette Saldana and Erika Pope. The Santa Monica defense was stellar as well, holding Long Beach to only one shot on goal the entire match.

Fresh off this success, the SMC women’s soccer team traveled to San Diego to play Mira Costa College on Friday September 7. The Corsairs fought hard and came out on top again with a 3-0 victory. SMC’s goalkeeper finished the game not allowing a single goal for the third time this season. Offsnsivley, Antoinette Saldana lead the way for the SMC with 2 goals. Filippa Struxsjo also scored a goal.

The Corsairs’ run came to an end on September, 11 when they were defeated in a close 2-1 away game at Santa Barbara City College. Up next for the team is a home game versus Chaffey College at 2 p.m. on Friday, September 14.