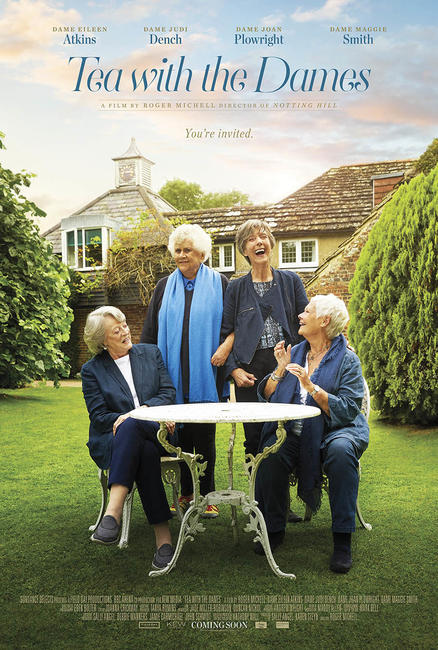 At The Movies With Lady Beverly Cohn

Can you imagine joining screen, stage and TV legends Dames Eileen Atkins, Judi Dench, Joan Plowright and Maggie Smith for an intimate tea party? Would you like to hear them talk about their most interesting personal and professional lives and share secrets about their experiences? Well, imagine no more as director Roger Michell (“Notting Hill”, “Venus”, “Le Week-End” and “My Cousin Rachel”) has created the enchanting “Tea With the Dames” in which these multi-award winning legendary performers sit around a table at Joan Plowright’s beautiful country cottage that she shared with her late husband Sir Laurence Olivier and reveal intimate stories about their adventures as young ingénues. These are clearly adoring colleagues whose relationships span decades. Between these gifted actresses, they have earned a massive amount of Oscars, Tonys, Emmys and BAFTA awards. One of the most endearing moments is a montage of each of these talented women receiving their Damehood honor from Prince Philip or Queen Elizabeth II.

This exquisitely shot film by Director of Photography Eben Bolter, begins with the Dames practicing vocal warm-ups such as “mi, mi, mi” or “Peter Piper Pecked A Peck of Pickled Peppers” and soon they settle in for a gossip fest, each of them comically retelling highlights, as well as lowlights, of their respective careers. Their conversation is unscripted and occasionally slips into being comically irreverent. Inner most thoughts and secrets are revealed such as Dame Atkins passing on playing Cleopatra because she felt she wasn’t pretty enough. An archival clip comes up of a young Dame Judi Dench playing that part. Vintage footage is shown throughout the film including scenes from Dame Dench’s performances in “Roots,” “School for Scandal,” and “Romeo & Juliet.” She also remembered that when she played Cecily in “The Importance of Being Ernest,” “I kept forgetting my lines.” There are also clips of her playing different queens including, “Her Majesty, Mrs. Brown” contrasted by her role as “M” in “Skyfall,” and Franco Zeffirelli’s “Tea With Mussolini,” co-starring Plowright, Dench, and Smith. The story is about English expatriates living in Italy at the beginning of World War II. Dame Dench recalls, “After a day of shooting, we would drink a whole bottle of Procecco and then try to find our hotel rooms.”

Dame Atkins, whose mother wanted her to be a dancer, remembers when she worked with Olivier in “Othello,” she put his eyelashes on for him every night. Playing Desdemona, she recalled that during one performance he slapped her so hard that it left a black handprint on her face. There is also an amusing clip of her doing a table read for “The Duchess of Malfi.” At the end, the director said, “Well done.” Illustrating her wonderful sense of humor, and perhaps a bit of insecurity, she replied, “It will never happen again.”

With clips from “The Prime of Miss Jean Brodie” and “Private Lives,” Dame Smith shares that when she worked with Olivier, “I was more nervous around him than the critics.” With her signature dry sense of humor, she also tells the story of how during the filming of “Harry Potter” she had to give reaction shots and comically demonstrated the different poses she assumed. There is another clip of a rehearsal from “Gosford Park.” “God forbid you should make a mistake, everyone would just stare at you.” Her parents didn’t approve of her going to the cinema but she revealed that her neighbor took her to see her first film, “The Jazz Singer” starring Larry Parks, a clip of which is shown.

Perhaps the only sad note is that Dame Plowright’s sight is failing, but despite that challenge, she is as bubbly, charming, and as effervescent as ever. Possessing a keen sense of humor she quips, “I put my hearing aids in.” She also reminisced about something her mother said, “You’re no oil painting girl, and thank God you’ve got my legs and not your father’s.” She shared a funny story that her husband couldn’t find the key to the bar and in his glorious, magnificently trained voice asked his son, “Where are the keys to daddy’s num nums?” At one point, she discusses acting as being the difference between actual truth and illusion. Fully aware that these fabulous women are in the their 80s, the director asked for their comments on aging which was met with playful hostility. Dame Dench uttered a naughty word that one would not expect to come out of her regal mouth, making it a deliciously ex-rated moment. He also inquires as to how it was working with their husbands and after a silent beat or two, Dame Smith says dryly, “Which one?”

Wit and laughter abound throughout this unique look into the life and times of these extraordinary women. As the shoot wore on, the Dames began to tire. Dame Smith quips to the director, “Has anyone told you how old we are?” Another question from the off-camera director was, “What would your older self tell your younger self today?”

Dame Plowright: “Get in touch with yourself at a young age and don’t wait until you’re older like I did.”

Dame Dench: “Try not to be so susceptible to falling in love.”

Dame Atkins: “Don’t be so bad-tempered and confrontational, and listen more.”

At last these fabulous women are given a glass of champagne and toast each other with love and deep affection but in fact, we should be toasting them for the enormous contribution they’ve made to their profession. The toast should also include the sensitive, creative hand of director Michell, whose “Tea With The Dames” is a beautiful thank you note to these ladies and a gift to us.

At the end of this captivating film, we hear Dame Dench’s voice reciting from Shakespeare’s “The Tempest:” “We are such stuff as dreams are made on…” and indeed these amazing women collectively embody that famous quote.

“Tea With The Dames”