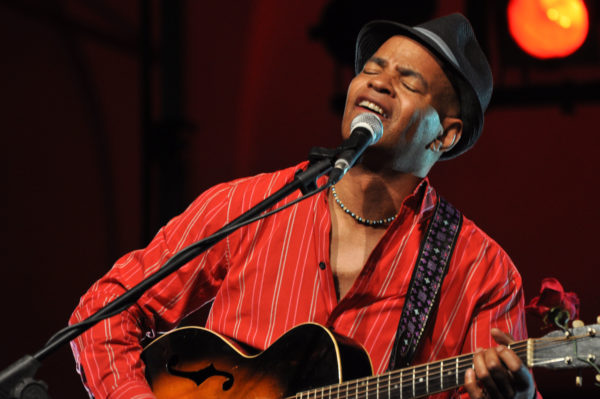 The Broad Stage presents True Blues – Corey Harris and Guy Davis — on Friday, September 28 at 7:30 p.m. Harris and Davis, two leading performers of acoustic blues, will each perform a set of their own before coming together onstage to celebrate the extraordinary music that has shaped their multifaceted careers.

Harris is a 2007 MacArthur Grant recipient who “forges an adventurous path marked by deliberate eclecticism” and was featured in Martin Scorcese’s The Blues: A Musical Journey, which followed him on a roots-seeking journey to West Africa.

He has earned critical acclaim as one of the few contemporary bluesmen able to channel the raw, direct emotion of acoustic Delta blues. Along with Keb’ Mo’ and Alvin “Youngblood” Hart, he raised the flag of acoustic guitar blues in the mid-1990s.  Although well versed in the early history of blues guitar, he’s no well-mannered preservationist, mixing a considerable variety of influences – from New Orleans to the Caribbean to Africa – into his richly expressive music.

Grammy-nominated guitarist, vocalist, harmonica player and story-teller, Guy Davis has spent his musical life carrying his message of the blues around the world, from the Equator to the Arctic Circle, earning him the title “An Ambassador of the Blues”. His work as an actor, author, and music teacher earmark him as a renaissance man of the blues.  Growing up in a family of artists (his parents were Ruby Dee and Ossie Davis), he fell early under the spell of Blind Willie McTell, Big Bill Broonzy, Lightnin’ Hopkins, Babatunde Olatunji and Fats Waller.

Davis most credits the legendary Sonny Terry, stealing and crediting from him everything that he could.  Davis said, “To me, a bluesman is somebody who has to carry a knife or a gun and enter dangerous situations and sometimes fuel it with alcohol—That’s not who I am. I call myself a blues musician, and to me the blues is a broad title. I include some ragtime, I make a nod to New Orleans, and a nod to the fife and drum players. And I always include things that make you want to dance.”