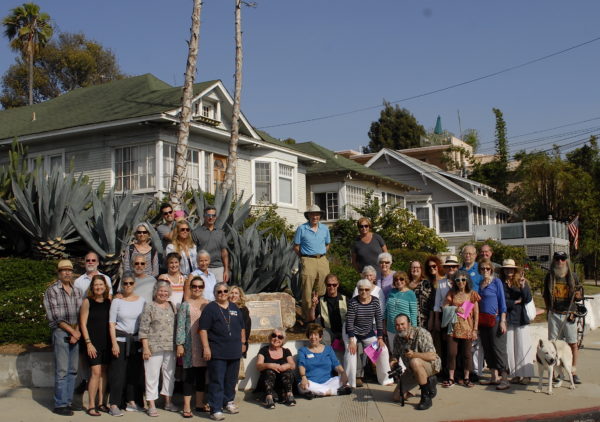 The City of Santa Monica recently installed three commemorative plaques in the Third Street Neighborhood Historic District nearly three decades after its designation in 1990. The City’s Landmarks Commission is tasked with providing a suitable plaque on or near a landmark or historic district indicating the designation.

“Sometimes you catch lightning in a bottle. The resident tenants and property owners of the Third Street Neighborhood Historic District did that in 1990 when they captured the imagination of a City Council that unanimously designated the neighborhood as Santa Monica’s first Historic District,” said resident Bea Nemlaha “They did it again on Labor Day when residents, members of the original designating City Council, former and current Landmark Commissioners, members of the Santa Monica Conservancy, and residents city-wide who are passionate about preservation gathered to celebrate the installation of bronze plaques commemorating the Historic District.”

The District, the first of three in Santa Monica, was created through a grassroots effort by neighborhood tenants and property owners. It is located along 2nd and 3rd Streets between Ocean Park Boulevard and Hill Street. Many of Santa Monica’s earliest and most prominent residents lived in the District. Thirty-eight Victorian, Craftsman and Spanish Revival buildings built between 1875 and 1930 contribute to the District’s historic character and reflect most of the historic architectural styles in the larger community.

The plaques are mounted on boulders located at the southeast corners of Ocean Park Boulevard and 3rd and 2nd Streets and on the Church in Ocean Park Parsonage lawn on the northwest corner of Hill and Third Streets.