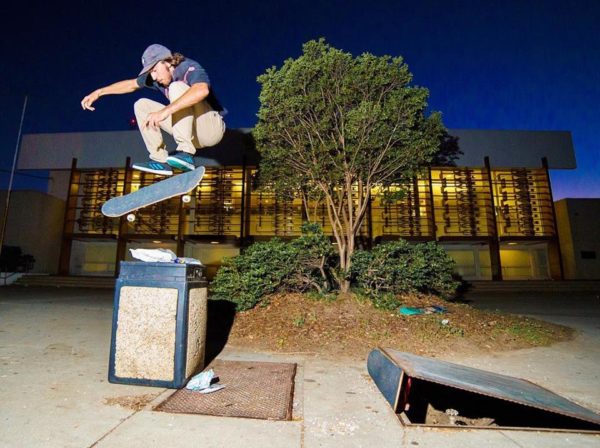 Sale of property may bring an end to famed skate park.

Skating and courthouses do not usually go hand in hand, but at the West Los Angeles Courthouse, skating is an everyday occurrence. This may soon change, however, as the property is being put up for sale.

In the 1990s, West L.A. skaters used to flock to the West Los Angeles Courthouse, located at 1633 Purdue Avenue, to shred in the courtyard, which has ample ledges to do tricks on.

“This is the O.G. spot for sure if you look at all the videos from back in the day,” said Sewa Kroetkov, a local skater. “People have always skated the ledges.”

In the early 2000s, skating was banned at the courthouse. In 2013, however, the West Los Angeles Courthouse closed down due to budgetary constraints and in 2014, was opened to the public for skating and soon became popular again. With ample space and smooth ledges, the “West LA Courthouse Skate Plaza” is one of the best places to watch skaters on the Westside.

“I love coming to this spot a lot because it is close to where I live and there are always people to skate with,” Kroetkov said. “It’s just a paradise every single day.”

“Friendships were formed and bonded there. A lot of the greatest skateboarders displayed their amazing talent and style. Many video parts were filled with lines throughout it. When skateboarders from all over the world visited, they made sure they stopped by the courthouse to skate there. It was truly a global skateboarding landmark,” California Skateparks wrote in a statement.

Last month, however, California Gover Jerry Brown signed a bill into law that will put the courthouse and adjacent court facilities up for sale. The bill, which was authored by  Assemblymember Richard Bloom of Santa Monica, is expected to generate millions of dollars in revenues for the state.

The bill, which went into immediate,  effect, authorizes the State Judicial Council to sell the buildings a “at fair market value,” and gives the County of Los Angeles the right of first refusal.

It is unclear how much longer skating will be allowed at the courthouse.