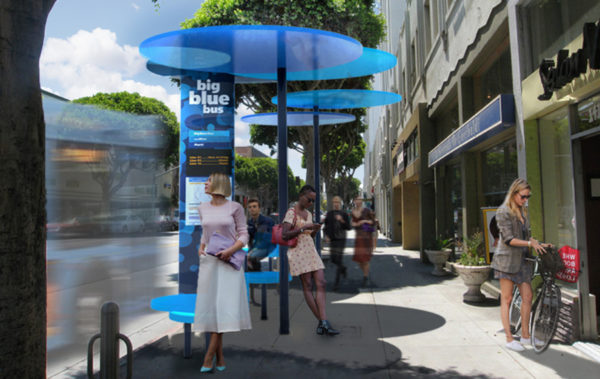 $700,000 will be spent to revamp the signage with real-time displays.

At last week’s Santa Monica City Council meeting, the Council awarded a contract for new Big Blue Bus real-time signage and solar lighting to Hawaii-based company Way Sine LLC. The City Manager is now authorized to negotiate a contract not exceeding the amount of $764,125 for the first three years.

According to City Staff, this is an attempt to raise ridership numbers by improving the experience of waiting for the bus. The staff report cites Big Blue Bus research which states that bus stops with less amenities and those that “feel unsafe” cause riders to imagine their wait to be longer than it is.

“Bus stops that feel unsafe, and with no amenities, result in perceived waiting times that are two to three times longer than the actual observed waiting time,” the report states.

Under this proposal, 200 bus stops will be receiving these upgrades, despite about half of them not meeting the established Big Blue Bus standards for real-time signage. According to BBB, only stops with “high volume” ridership are to be provided with real-time signs, meaning stops with 100-999 average daily boardings.

The staff report states that while only about 100 of the stops meet the standards, the signs and solar lights are packaged into a single unit.

“A bus stop that was eligible for, and warranted, a light would also receive a real-time display,” BBB said when reached for comment. By this criteria, all stops with five or more average daily boardings during the “off-peak” period between 5:30 p.m. and 6:30 a.m.

This move follows the 2015 Bus Stop Improvement Project, in which BBB installed about 35 real-time signs at bus stops within the City. The Santa Monica Mirror reached out to the City and Big Blue Bus regarding the comparative costs of those signs to the ones included in this proposal.

With a total cost of about $764,000 for the first three years of this project, each of the 200 stops will cost about $3,820 to upgrade. That is about $380,000 in improvements for stops with fewer than 100 daily riders. That said, the staff report states that while these 200 stops represent 22 percent of BBB’s total stops, they represent about 66 percent of BBB’s total ridership (44,040 average riders per weekday). The costs also include tools for diagnostic testing as well as a warranty for repairs, including parts and labor.

According to the proposal, the City Manager will be authorized to make up to two one-year renewals after the first three years, with a maximum additional cost of $24,000 per year.

According to the staff report, Way Sine LLC has been recommended as the contractor due to their low bid of $706,195 as well as the features included in their real-time signage.

The only other bid listed on the staff report was from CHK America, Inc. While CHK’s signage was stated to have more extensive graphics capability as well as other features, their bid of over $2,000,000 was not selected.

“The Way Sine proposal, while not as feature- and service-heavy as the CHK proposal,” the report reads, “fully satisfied the needs identified in the technical requirements of the request for proposal.”

According to the report, other transit systems such as the Los Angeles Department of Transportation (LADOT) rated Way Sine’s equipment highly.

Which specific stops will receive these upgrades has not yet been decided.

“Big Blue Bus is conducting a customer survey to gain feedback on desired stop locations for these improvements,” said a BBB spokesperson.

The proposed costs for this project will be split between the city’s Prop 1B and Bus Stop Amenities funds.