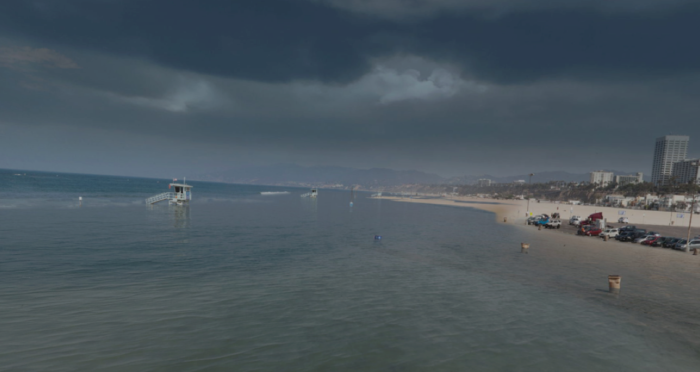 The United Nations Intergovernmental Panel on Climate Change (IPCC) recently released a special report that warns we have just 12 years to implement changes to the global energy infrastructure to keep the impacts of global warming at moderate levels. Santa Monica, which has many areas right at sea level, are among the areas that stand to be the most affected.

“There is no documented historic precedent,” said IPCC said in their report   “Some of the most affected areas are small islands, megacities, coastal regions and high mountain ranges.”

The IPCC report suggests that the impacts of climate change could come sooner, rather than later, due to a combination of higher sea levels and more intense rainfall, if carbon emission is not reduced within the next twelve years.

“Scientists have been warning us for years that we can expect to see more extreme weather with climate change. The heat waves, wildfires, and heavy rainfall events of recent months all over the world underscore these warnings,” said Hoesung Lee, chair of the IPCC.

The Santa Monica City Council took steps this week to address the impacts of climate change when at their regular meeting on Tuesday, October 9, unanimously approved the Local Coastal Program (LCP) Land Use Plan at last night’s meeting – the first update to the plan since its adoption in 1992.

According to the City, the update is an important step toward aligning the LCP with current City policies related to mobility, sustainability and adaptation to sea level rise, as required by Coastal Commission guidelines.

“We have been working for more than two years with Coastal Commission staff to ensure that our updated LCP Land Use Plan will support a coastal development permit process that aligns with our sustainability and mobility goals,” said David Martin, Director of Planning and Community Development. “In addition, our planning process utilized the Coastal Commission’s guidelines and the latest sea level rise science and modeling to develop policies to prepare Santa Monica for the advent of sea level rise. The Land Use Plan outlines policies for hazard zone properties as well as a roadmap for adaptation to make our City more resilient as measurable sea level rise occurs.”

The Land Use Plan consists of seven policy areas that address State Coastal Act requirements. Two of the most important policy areas address access to the beach and sea-level rise. The access policies ensure beach visitors have many options to access the coast, including management of shared parking resources and a comfortable pedestrian and active transportation environment. The sea level policies will prepare Santa Monica to plan strategically to protect beach infrastructure and coastal assets. Sections of the California coast are already experiencing destruction from wave run-up and storms. While Santa Monica has not yet experienced effects of sea level rise, adopting these policies now makes Santa Monica one of the first Southern California cities to begin this preparation.

The LCP Land Use Plan adoption follows two years of outreach and analysis. Residents may remember the OWL visualization tool on the Pier in late 2016 depicting the impacts of sea level rise. Community feedback from the OWL as well as from public meetings and other outreach tools informed the Final Draft LUP adopted by Council.

The LCP Land Use Plan will now move forward to the Coastal Commission for certification for conformance with the Coastal Act.The next step will be development of an Implementation Plan, including an update of the Low-Cost Lodging Mitigation Fee.Until full certification including the Implementation Plan, the Land Use Plan will serve as a basis for Coastal Commission’s review of Santa Monica’s Coastal Development Permits. The combined process in the future under City authority will integrate coastal sensitivity unique to Santa Monica and streamline the review process for projects in the Coastal Zone.