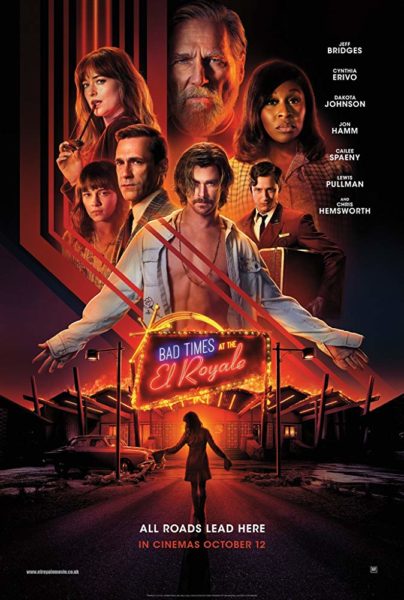 Wow! From the jet black soundless screen that begins this movie, to the emotionally explosive end, get ready to be completely drawn into a tornado of wild twists and turns inhabited by rich, intense and colorful larger-than-life characters who all come together at the El Royale, a once-bustling, now dilapidated resort in Lake Tahoe. This is a poetic symphony of life, a moody, creative concoction of characters and conversation – a real “trip!”

Writer/director Drew Godard is a master of cinema, one of the best writer/directors working today. His background is in television writing (Buffy the Vampire Slayer and Angel). He has even written for comic books. He “gets” the medium of film in a way seldom seen. There are lines that will become part of our lexicon, such as “I know men like you – they never stop talking.” Or “I’ve done horrible things.” “So has everybody. Shit happens. Get the whiskey.”

The camera angles, the colors, the dialogue and silences, the movement of the camera and most emphatically the use of music all come together to make this movie the total experience that it is.

The actors also add to the excellence of this work of art. The characters Godard has written are an incredibly fascinating mélange of the most dramatic elements of humanity. You will find yourself drawing conclusions about who these people are, only to be surprised by what lies behind their outward personalities. No one is who they seem, and all of them are true to their real identity in the end. They are all much more complex and unique than the personalities they present to the world, which may be a common trait for most of us.

And the acting…Jeff Bridges can say more in two seconds with the transformation of the look of his eyes and his subtle expressions than most actors can convey in a ten-minute dissertation. Darlene Sweet, portrayed beautifully by the talented Cynthia Erivo, sings her way through the film. Her voice becomes an integral tool in the manipulations initiated by the characters to outwit one another. Jon Hamm finds the humor in Laramie Seymour Sullivan and keeps it bubbling under the surface. Chris Hemsworth excels at playing a character completely against type. Lewis Pullman (son of Bill) is riveting as Miles, the (supposedly) mild-mannered hotel manager. Dakota Johnson lets her sweetness mask her rage as Emily Summerspring. Music plays anintegral role in this movie – it’s not just a sound track. A jukebox becomes a leading character.

This is on the surface a period piece from the ‘60’s and ‘70’s. The color, the location and the music are skillfully recreated to the time. However the story is universal. “Bad Times at the El Royale” is another movie that will go down in film history. It’s a poetic symphony of life populated with characters that will live on in the minds of everyone who sees it. The film also puts life, faith, art, abuse and war into perspective on a larger scale.

Kathryn Whitney Boole has spent most of her life in the entertainment industry, which has been the backdrop for remarkable adventures with extraordinary people.She is a Talent Manager with Studio Talent Group in Santa Monica. kboole@gmail.com