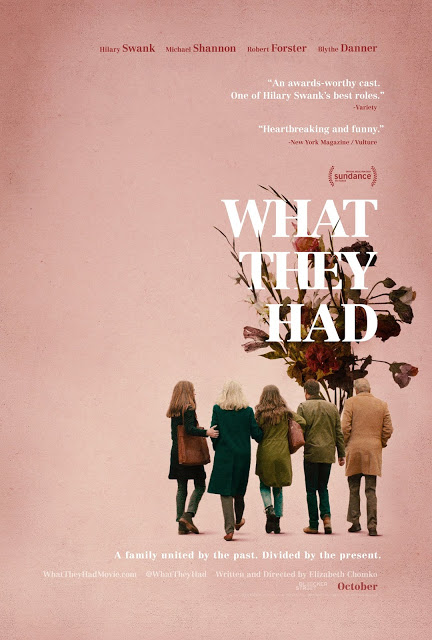 “What They Had” is a first-time project for Elizabeth Chomko as a writer/director. She possesses a fine intuition for filmmaking and this is a story straight from the heart. The idea for the screenplay came to her while attending her grandfather’s wake. The movie is a heartfelt eulogy to her grandparents. After finishing her first draft in a matter of hours, Chomko spent the next seven years writing 30 more drafts of the script and doggedly “knocking on doors” to get the movie made.  She began to realize that the only way the project would come to fruition was with herself as director. She managed to get the project into Hilary Swank’s hands, Swank was extremely impressed and things began to move forward. Patience, talent and perseverance won out once again in the film industry.

The film was shot on a shoestring budget in 22 days with almost no rehearsal. The ensemble of actors was hand picked by Chomko. Swank, Robert Forster and Chomko reported that the group bonded like family almost immediately. The actors felt that Chomko gave them permission to feel that the words were their own.

The screenplay is extraordinarily well written and camera work by Roberto Schaeffer is creative and skillful. The story pulls you in immediately to the lives of all four of the major characters, without judgment. Swank, Michael Shannon, Robert Forster, Blythe Danner and Taissa Farmiga all turn in extraordinary performances. Danner was concerned that she had no personal experience with anyone who had memory loss, as does her character. However, she portrays the role perfectly.

Chomko knows instinctively how to use symbols to pull deep emotions. A perfectly crafted cocktail communicates love and reveals how our senses attach emotional memories to a vision or taste. A wild turkey may bring tears to your eyes. There is a line late in the movie spoken by Danner’s character that has a huge impact and the moment will remind you to appreciate your life minute by minute. This movie just might restore your faith in human nature.