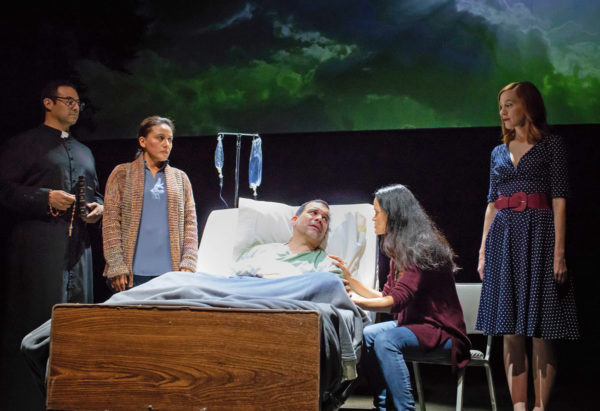 “The Untranslatable Secrets of Nikki Corona” misses the mark.

Trying to contact the dead isn’t exactly a new concept. For ages, grieving the loss of loved ones has driven people to contact psychics, mediums, and fortunetellers, most of who traffic in the desperation of the loved one left behind. Who could ever forget Whoopi Goldberg’s portrayal of Ada Mae, the charlatan suddenly becoming an authentic seer in the iconic love story “Ghost”? All this said, don’t get your hopes up as playwright José Rivera’s “The Untranslatable Secrets of Nikki Corona” on stage at the Geffen Playhouse, while a different, and could have been a creative spin on the same subject, is a rather silly, poorly written and acted play during which I restrained myself from leaving, but my professional responsibility kept me bolted to the seat.

Under the direction of Jo Bonney, who did the best she could with a flawed script, the play begins with a young woman named Abril poised to jump off of a bridge. She makes a desperate last phone call to her twin sister Nikki (both parts played by Onahoua Rodriguez) who doesn’t feel like talking to her at that moment, a decision that jump-starts the action that takes place in this interminable two-act play. Riddled with guilt, Nikki seeks help from a Brooklyn agency named A Better Orpheus Inc.,* whose business plan is to pair the bereaved with a person facing imminent death who will, on dying, take a message to the deceased family member. Maren, the owner of the business, played by Cate Scott Campbell, is a no-nonsense tough businesswoman who demands that Nikki sign a very complicated, no refunds contract and fork over the payment before she can assign a “traveler” to take a message to her sister. Nikki signs the contract and pays the fee, part of which goes to the family of the “traveler.” The grieving sister visits her messenger Orlando, who is in the hospital dying of cancer.  Given the weak script, Ricardo Chavira does a creditable job in attacking his role and gives the best performance of the evening. After a mutual attraction is established, and a lot of getting-to-know-you conversation, finally, Nikki whispers her message in his ear, and that concludes Act 1. If all this sounds like it’s beyond the usual demand for the suspension of disbelief, well it is.

Bearing in mind Orlando’s deteriorating physical condition in the hospital, lo and behold in Act II we find him in what is probably Purgatory, spry and healthy and as good as new. Now this way station to heaven looks like a pretty nice forest and is overseen by a legion of octopuses. He is greeted by a sexy Lisandra, also played by Cate Scott Campbell, whose job it is to show him what he must do before he gets to go through the pearly gates. It is about now that playwright Rivera does a

360-degree turnabout and instead of Act II being about whispering the message in Abril’s ear, it becomes a version of “This Is Your Life.” Orlando is forced to encounter some of his deceased relatives including his morally bereft great, great grandfather and his mom, (Zilah Mendoza) formerly a shady businesswoman who goes through stacks of papers trying to make amends. Hana S. Kim’s projection design supports this moment with a flurry of papers flying across the background, and when Orlando meets his brother Manny, (Juan Francisco Villa) who died from injuries sustained in a motorcycle accident, hundreds of helmets are projected onto the back wall.  Finally, he completes his encounters with dead relatives, whispers his message in Abril’s ear and asks, “Can I go to heaven now?” The sooner the better, I say.

As far as the rest of the production values, as always Cricket S. Meyers sound design is spot on as is Lap Chi Chu’s lighting design with Myung Hee Cho’s set design almost rising to the occasion. On the whole, while some of the special effects were creative, others were unimaginative and derivative. Even if the technical aspects were outstanding, that would not have saved this production.

While I thoroughly support Artist Director Matt Shakman’s commitment to developing and producing new works, there has to be a differentiation between a truly actualized play and one that should be a workshop production and performed for a non-paying audience.  All this said, José Rivera is a highly respected playwright and I look forward to his next work.

*One wonders if there is a connection between the ancient Greek legend, where Orpheus descends into the underworld to rescue his wife Eurydice, and Orlando’s mission to deliver a message but without the promise of returning to the land of the living.

“The Untranslatable Secrets of Nikki Corona”