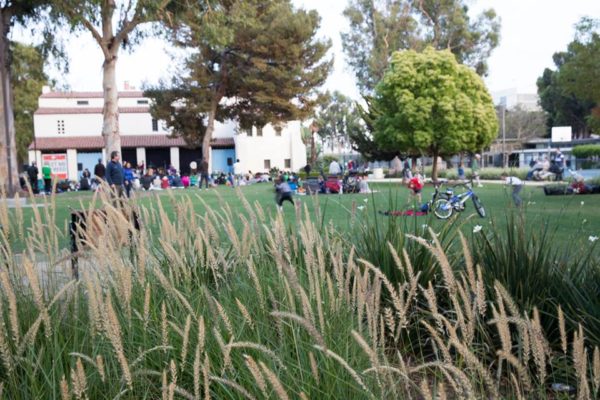 Lewd acts becoming an issue at this Santa Monica park.

According to the 2018 Greater Los Angeles Homeless Count, the number of homeless citizens has decreased by four percent from the previous year. Despite this seemingly significant decrease, Santa Monica residents have found that some of the encampments are a significant cause for concern. Most recently, several parents have witnessed disturbing incidents at Reed Park.

One such instance occurred the week before last, when Jen Levy and her friend Debbie Mahdessian took their 12-year-old sons to Reed Park for a tennis lesson. While the intention was to leave their sons in the class and return to pick them up afterwards, Levy decided to use the restroom first.

Inside the restroom, Levy could tell that there were two homeless individuals having sexual relations inside the stall.

“You could see [in the gap beneath the stall door] someone’s pants dropping around their ankles,” Levy said.

The incident was reported to park employees and the police were called, but by the time they arrived it was too late to catch the perpetrators, who had by then returned to a larger group of homeless people in the park.

“My friend and I were really bummed out,” Levy said, “because we can’t leave our kids at the park.”

Debbie Mahdessian, who was with Levy at the time of the occurrence, runs Santa Monica Tennis Collective, a youth tennis program and stated that the two of them are not alone in their concerns.

“A lot of the parents in the program are frustrated because Reed Park is the only place where you can reserve courts and send your kids so they can go play tennis,” she said. “But clearly like my 12-year-old son, I’m not gonna let him go to the bathroom alone there.”

“It seems to me certain parks like [Reed Park] should have more regular patrolling than other parks,” Mahdessian said.

Another local parent, Colette O’Connell, also had an unsavory run in with a homeless man in Reed Park.

“I was on court number 2,” she said, “[and] a guy was standing over by the side of the court and said ‘do you want any tennis balls?’”

After looking over at the man, he pulled down his sweatpants and exposed himself to O’Connell and her 11-year-old son.

O’Connell notified a park employee who called for a park ranger. The perpetrator was reported by several other witnesses and eventually was arrested. O’Connell has been summoned to court to testify on the incident.

Another instance O’Connell mentioned happening in Reed Park was one in which she was taking her son to the restroom. Upon opening the door and seeing garbage and refuse all over the restroom, she pulled her son back and had him use the women’s restroom instead.

“[Her son] said ‘you know there was somebody in [the men’s restroom]’,” she said. Apparently, her son had seen a man hiding behind the door when she had pushed it open, though O’Connell hadn’t noticed.

“I just think it’s a dangerous situation, to tell you the truth.”

Many similar cases have been posted about across social media. The City of Santa Monica provided a statement to the Mirror on the subject.

“The City of Santa Monica wants all residents to feel comfortable in beloved public spaces and parks. We understand that the impacts of the regional homeless crisis are felt by residents during the course of everyday life, including in Reed Park. This is why we have made significant investments in infrastructure, programming and public safety at Reed,” the statement reads.

In addition to planned improvements for the physical park, the City is increasing patrols in Reed Park as well as other.

“The Santa Monica Police Department has enhanced their presence in Reed Park,” the statement reads. “Public Service Officers have made Reed a priority and regularly patrol the park. The Mounted Patrol Unit will continue to patrol Reed and other municipal parks on a routine basis.”

Along with increased police presence, C3 — one of the City’s homeless outreach teams — visits Reed and Tongva Parks multiple times a week to try and connect the homeless population to services and shelters.

The City is also pressing incentive programs such as “Meet Me at Reed,” which is a seasonal weekly event on Saturdays held with the intention of bringing the community together with things like music and entertainment.

“We’re experimenting with other programming opportunities like food trucks, and welcome the community’s involvement in other ways to activate Reed,” the statement ends.