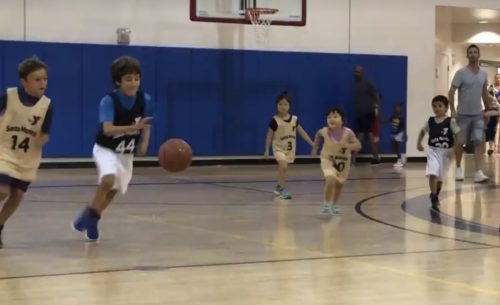 Welcome to the first issue of volume one of Swish, a weekly periodical with recaps and photos of Santa Monica YMCA youth basketball games and other pertinent info such as standings, schedules, announcements and updates from the program.

Some of the kids know me as the man with the hat. I always wear a hat, blazer, colorful shirt and shoes when I’m coaching a game. This is so the kids can find me when they are on the court, in order to hear any instructions and also, to honor individuals that I admire from the world of basketball, who wore colorful clothes, and lost their lives to cancer: Stuart Scott, Dr. Jack Ramsey, Craig Sager and Jim Valvano.

I’ve been involved with YMCA youth basketball for the past few years, and have worked with outgoing director Pete Arbogast, “The Voice” of USC football, and the man who resurrected YMCA basketball in 2011, and who built it to the successful program that it is today.

Pete officially retired this past weekend form his directorship of youth basketball at the Santa Monica YMCA, and all players and parents can’t thank him enough for everything that he has done.  Personally, I recommend when USC football is on television, turn down the volume, and put your radio on instead, and listen for his iconic “How do you do!” when USC scores a touchdown. We wish him well and say to Pete “Fight On!”

What Swish is About

Swish is about the kids involved in YMCA basketball and relies on contributions of stories from players, parents, coaches and young writers. Game recaps, player profiles, pictures, observations, news, updates, stats, schedules and standings are needed from the help of everyone that can contribute.

Swish is the help inspire young players in the YMCA basketball program, and recruit more kids to play basketball. Our kids love seeing their names and stories about themselves in the media, and it helps to build confidence and encouragement to continue to strive in achieving goals.

My wish for Swish is that it will become popular for all those involved in YMCA basketball, fans of youth sports and young writers that make contributions.

This past Saturday, all teams had a practice session followed by a scrimmage against another team in their division. The Santa Monica YMCA Fall basketball league consists of four divisions: Rookies, Bantams, Minors and Majors. Sunday was opening day of the regular season for half of all the teams in the Fall league.

Vitalina Moncher and Brendan Still hit buckets to make it a 4-4 game just before the half. Moncher then stole the ball with five seconds left and rushed down and hit again as the halftime buzzer sounded to give our Bulldogs a 6-4 lead and send the Bulldogs and their fans into a frenzy. The Swans then tied it 6-6 before Noah Levy went coast-to-coast twice to hit two layups in the final minutes to secure the victory.  All 10 Bulldogs showed up and all played hard. A special shout-out to Mariamawit Belew for playing very well. – Submitted by Coach Rick Moncher

The Crows and Cats opened Fall 2018 YMCA B-ball league with a hard-fought competitive Rookie League game as both teams looked to open their seasons with a victory. After a close 1st half, the Cats team was able to pull away in the 2nd half for a 12-5 victory. The Crows were led by Dylan Kravitz and Ethan Pages with two points each. Veronica Machala chipped in a point on a free throw at the end of the game. The Crows take on the Swans next. – Submitted by Coach Bill Kravitz

The rookie Hawks played the Swans in Saturday’s scrimmage. Amir Enayati led the team with one field goal and five rebounds. Chase Jenkins and David Casparian were strong on the boards as well with four rebounds each. Juney Jones played well in her rookie league debut as well. Submitted by Coach Charles Ellinwood

The Bengals had an impressive team performance with good man to man defense. Asher Zaczepinski was player of the game with multiple baskets and steals, and baskets were scored by Dominic Drew on a crazy deep corner shot over the backboard, Gavin O’Brien, Ryan Cohen, and Julian Weinerman also had field goals.  Kai Mevasse was a rebounding machine grabbing multiple rebounds and imposing his will on defense. The Bengals showed good team play by passing the ball around, and communicating with each other on defense. Looking forward to next week. – Submitted by Coach Paul Drew

With a fantastic effort and team-first attitude, the Bantam Titans came away with a well-balanced win. Everyone on the team contributed in a big way. Archer Aguilar led the team in points and found many open players for baskets. James Petrovich loves to shoot (and make) shots from the outside. Liam Mulholland played great defense and blocked at least six shots before the coach lost count(!) and he also led the team in rebounds. Ivan Gatynya scored two baskets. Rayan Etemadnia played tough defense and was the best dribbler on the court. Luke Hill grabbed several rebounds and assisted on a couple of baskets. Ronan Hill contributed in every way and showed his team how to play team basketball. Errol Besincioglu was a huge contributor with two baskets in his first game in the Bantam League. Well done Titans! – Submitted by Coach Michael Ma

The Vikings and the Falcons put on quite the show for the crowd in a back-and-forth affair Sunday evening. On the same day that several NFL games went down to the final possession, these Minor-leaguers with NFL-inspired names decided to keep the drama going. With Dean Phelan dictating the pace, the Vikings kept the offensive pressure turned up all game. Meanwhile, the Falcons matched them shot-for-shot through regulation — including one from downtown — leaving the Vikings trailing by one with free throws to come. That is when Jack Phelan, in his Minors debut, sunk a clutch free throw to tie it, followed by teammate Kayra Sanar sealing the deal with a clutch shot of his own on the final free throw of the game. What a game! After this late evening contest, players and fans of both teams most assuredly went to bed with hoop dreams floating in their heads. – Submitted by coach Shannon Booher

The Bills beat the Bears Sunday, led by top scorer Hunter Esposito-Doi. A memorable highlight was when Priya Mevasse grabbed a defensive rebound, dribbled coast-to-coast, pump-faked a defender and scored a lay-up! Alex Wray was a strong rebounder for the Bills. Weston Keslow and TJ Turner played tough defense, forcing several turnovers. The Bills sunk a couple free throws at the end to seal the victory over the Bears. – Submitted by Coach Jonathan Wray

The Broncos played well on both sides of the floor during their scrimmage Saturday evening. They made solid defensive rotations and on the other end moved the ball selflessly as everybody on the team scored. They were led by their seventh grade point guard Benjamin Dreifort, who’s pass first nature, defensive prowess and gritty rebounding were truly contagious. Combo guard Jack Froom also helped orchestrate the offense with his unselfish play. Sharpshooter Keenan Bryant delievered a flurry of three pointers and lock down defender Jason Tun also had a stand out performance as he turned a handful of his solid defensive possessions into transition buckets on the other end during the scrimmage Saturday evening as the Broncos look forward to the fall season. –  Submitted by coach Sam Brody

Each week, Swish will have a profile of a coach or player who inspires all of us involved in Santa Monica YMCA basketball.

This week’s profile is of a young player, coach, and referee: Xialoh Hermosillo

Xialoh Hermosillo is the youngest coach in the Santa Monica YMCA youth basketball league, and is currently the coach of the Bantam Steelers, along with his mom Wendy.Xialoh is a veteran of many seasons as a player, coach and referee.

Paul Drew: What’s your favorite thing about coaching youth basketball?”
Xialoh Hermosillo: It’s helping the kids enjoy the experience of playing basketball and to help them develop a passion for the game”

What do enjoy about being a player at the YMCA?There are many reasons, but mostly it’s the opportunity to play with friends, and even compete against friends, that makes for a fun time with each game.”

Do you like being a referee?Actually, I do, because I get to help the kids understand what they can improve upon with their skills and knowledge about the game, by explaining the calls that I make.

Xialoh is a great example that it doesn’t matter how young you are, there is knowledge to be shared and taught. He’s an inspiration to other young players and their parents.

All games are played in the gymnasium of the Santa Monica YMCA.