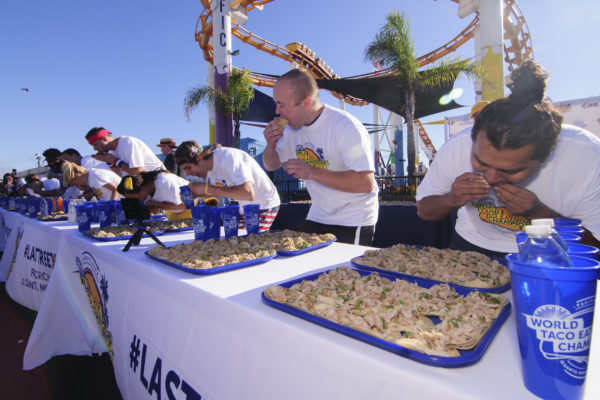 Eight minutes, 12 competitors, 302 total tacos consumed. This is what went down at the inaugural Pacific Park World Taco-Eating Championship on Thursday, October 4 on the Santa Monica Pier. Emerging victorious from the heaps of tortillas and shredded pork was competitive eating legend Joey “Jaws” Chestnut, who downed a world-record 62 street style carnitas tacos in eight minutes.

The event, which took place on National Taco Day, started off with a bang. Chestnut set a fast pace early, stuffing whole tacos into his mouth and washing them down with water, downing 16 tacos within the first minute.

After setting this record, Chestnut now holds 45 eating records. Most notably, Chestnut has won the Nathan’s Hot Dog Eating Contest 11 times and set the world record in 2018 for eating 74 hot dogs in 10 minutes.

For first place, Chestnut took home $2,500, half of the $5,000 in prizes up for grabs in the contest. Gideon Oji had a good showing, downing 52 tacos for a second place result. Adrian Morgan came in third with 40 tacos while Mikl Sudo, the world’s top female competitive eater, came in fourth place finishing 37 tacos.